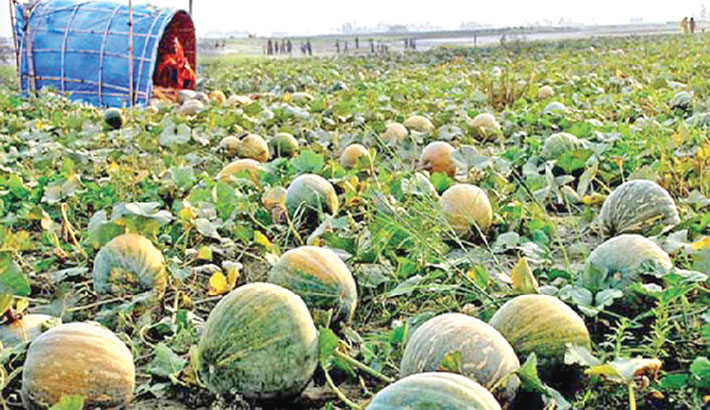 GAIBANDHA: Sweet pumpkin has brought smiles on the farmers’ faces here as they are getting fair prices of their produces in the local markets, prompting the growers to cultivate it abundantly in char lands.

But the farmers didn’t get desired output and price, they said.

A decade ago, Practical Action Bangladesh (PAB), an UK based international non-government organisation, came forward, motivated the farmers and provided them with need base training on farming sweet pumpkin on the char lands in sand bar cropping method.

In this method, the farmers’ dug holes on the char lands and keep the normal soil of the mainland mixed with cowdung in the hole, removing the sand from it.

Then the farmers sew the 3 or 4 seed of pumpkin in the hole.

In course of time, the seedlings grow well and after being matured, the plants bear a number of sweet pumpkins.

In this way, the growers earn more profit. Later, an office of Bangladesh Agriculture Research Institute (BARI) was set up in Gaibandha district town.

The BARI officials also motivated the farmers to cultivate the sweet pumpkin on the char lands to get desired output and fair price. The farmers also responded positively and cultivated the crop profusely.

Department of Agricultural Extension (DAE) also inspired the growers to farm the variety on their char lands to attain the cherished goal.

The DAE officials also provided the interested farmers with training and quality seed to cultivate the variety on their char land successfully.

After taking training and seed from the DAE, a large number of farmers farmed the variety on their char lands last year.

Some farmers have started the harvest of the variety and are selling it in the local market.

One kilogram of pumpkin is being sold on an average at Tk 45-60 depending on its size and quality.

Rajib Karmakar, a pumpkin grower of Dhutichora area under Gidari union of Sadar upazila, said the production cost of pumpkin on a bigha of land is between Tk 10,000 and Tk 12,000.

The sweet pumpkin is more profitable than the other vegetables as we are to do a little invest in sweet pumpkin farming, he added.

In reply to a query, he said the field level sub assistant agriculture officers (SAAOs) of the DAE are always giving them advises to make the farming a grand success.

Many farmers of other chars of the district are coming to see the land of sweet pumpkin and exchanging views with him about its successful cultivation, he added.

Another farmers Saklain and Jamil of the area said the sweet pumpkin produced on their land brought smiles on the faces of the growers as they are getting high prices by selling the variety.

Deputy Director of the DAE agriculturist Masudur Rahman said over 510 hectares of char land of the upazilas had been brought under sweet pumpkin farming during the current season.

As the farming of the variety is more profitable than other vegetables, they will be trying their level best to expand its cultivation in next season, he said.

All SAAOs working in the char areas were instructed to motivate the farmers so that they could cultivate the variety on the unused char lands to meet the demand of the vegetable, he said.

Their aim is also to help the growers earn more profit through farming the variety in coming years, he concluded.