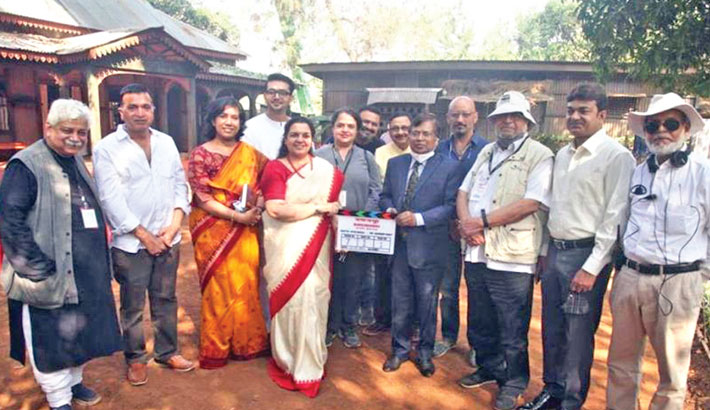 The cast and crew of the film.

Shooting of the film ‘Bangabandhu’, a biographical film on Bangabandhu Sheikh Mujibur Rehman, jointly produced by India and Bangladesh, has begun in Film City in Mumbai, report agencies.

The Muhurat shoot was held at the Dadasaheb Phalke Chitranagari on Thursday, amidst all Covid-19 protocols laid down by the Indian Ministry of Information and Broadcasting.

Veteran Indian filmmaker Shyam Benegal is directing the bio-pic, being produced as part of the birth centenary celebration of the Father of the Nation of Bangladesh.

Indian Union Minister for Information and Broadcasting Prakash Javadekar had mentioned about this film during the inauguration of the 51st International Film Festival of India, now on in Goa, as an example of close cooperation in the field of art and culture between India and Bangladesh. Incidentally, Bangladesh is also the Country of Focus at this year’s IFFI.

Atul Tiwari and Shama Zaidi have written the screenplay of the film, while Nitish Roy is the art director. Music is by Shantanu Moitra. Akashdeep is the director of photography.

The film is being produced under the Audio Visual Co-Production Agreement between India and Bangladesh.

The shooting for this much-anticipated film was scheduled to start in March last year in Bangladesh. Owing to the ongoing pandemic, the first phase of filming will now take place in the Film City Mumbai, which will go on for approximately 100 days.

The second phase shooting will be held in Bangladesh, mostly filming the Muktibahini’s struggle for independence.