Both Mominul, Nayeem are expected to start in 1st Test 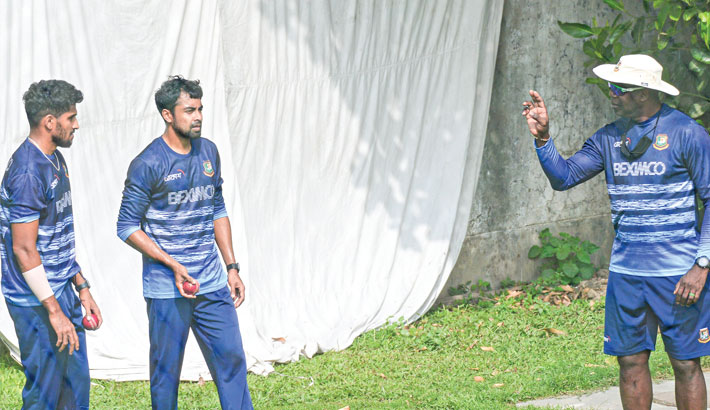 Members of Bangladesh preliminary Test squad began their official preparation on Thursday at the Sher-e-Bangla National Stadium for the upcoming two-match series against West Indies, starting next month.

Though West Indies were busy in preparing their Test squad since their arrival in the capital on January 10, it was a different case altogether for the hosts as apart from some enthusiastic members doing individual training, none were seen doing a workout as a unit.

The three pace bowlers - Abu Jayed Rahi, Khaled Ahmed and Ebadat Hossain - were the only members shedding their sweats regularly as they live in the academy premises.

The group was later joined by off-spinner Nayeem Hasan, who was going through rehabilitation following his finger injury.

As a result, it came as a total surprise to see head coach Russell Domingo along with all the other available members of the coaching group arrived in Mirpur on Thursday morning to guide the Test squad members, who are not part of their ODI set-up.

National selector Habibul Bashar confirmed to The Daily Sun that the members of the Test squad entered the bio-bubble on Wednesday.

Bangladesh team management can heave a sigh of relief as both injured cricketers Mominul Haque and Nayeem are expected to be available from the opening Test, beginning on February 3.

“Both Nayeem and Mominul were looked to be fine and they will be all-right before the opening game,” Domingo told The Daily Sun.

The southpaw batted for hours comprising his stint in the indoor with the bowling machine followed by his batting against throw-downs provided by the coaches and few deliveries bowled by Abu Jayed.

Selectors are expected to name an 18-member final squad for the two-Test series and The Daily Sun learnt that wicketkeeper-batsman Nurul Hasan and pacer Khaled Ahmed are likely to be excluded from the 20-member preliminary squad.