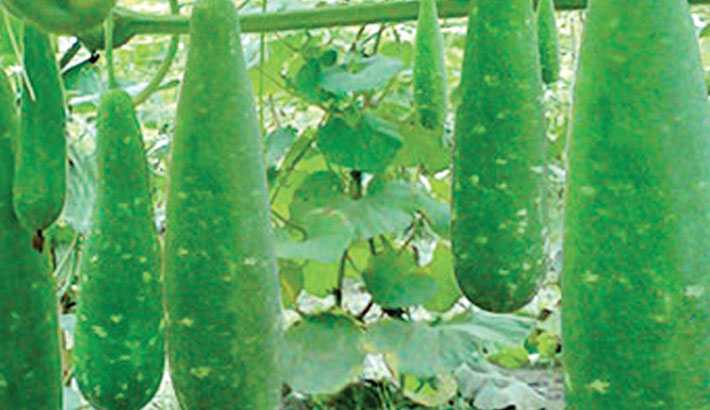 NARSINGDI: Farmers of different upazilas in the district are becoming financially benefited by farming bottle gourd on their land in recent years.

Due to congenial weather, low cost and high demand, farming of the vegetable is on the rise across the district.

Sources said the farmers of the region have geared up vegetables farming including bottle gourd during the current season with much enthusiasm as they made huge profit last year from the cultivation of the vegetable.

Department of Agriculture Extension (DAE) officials encouraged farmers and given them training for cultivating vegetable as the climate and soil of the region are suitable for cultivation it.

Deputy Director (DD) of Department of Agriculture Extension of Narsingdi said after getting successful result a number of farmers specially educated youths in Shibpur and Belabo upazilas of the district have started farming of the vegetable in their homestead garden and other fallow lands.

Deputy Assistant Agriculture Officer said out that 600 other farmers used the DAE’s method and got good yields of vegetable.

Over 600 farmers in district have made good profits this year by organically farming bottle gourd.

The DAE provided loans and training to the farmers, leading to a much higher yield than the farmers had expected.

The use of high-yield varieties of the plant, modern mulching and cutting methods, and using coco dust as fertiliser made bottle gourd cultivation much cheaper for the farmers.

According to the DAE office, at least 500 farmers of the district received loans and training under the National Agricultural Technology Programme (NATP) to cultivate bottle gourds.

One such farmer, Shuvo Sarker from Monsafar char village of Shibpur Upazila, said he cultivated the vegetable on 50 percent of his land.

He said, “I applied coco dust as fertiliser in addition to cutting and mulching the plants according to the DAE’s suggestion and it proved beneficial. I have invested Tk 25,000 and earned Tk 1,00,000 in profit till date.

He also said he got his bottle gourds in a mere 38 days time, which is unlikely in the traditional way of farming.

“It was difficult to believe that the farmers would be able to cultivate the bottle gourds amid the disastrous flood and the deadly pandemic, but they made it possible,” said agricultural officer of Sadar upazila.