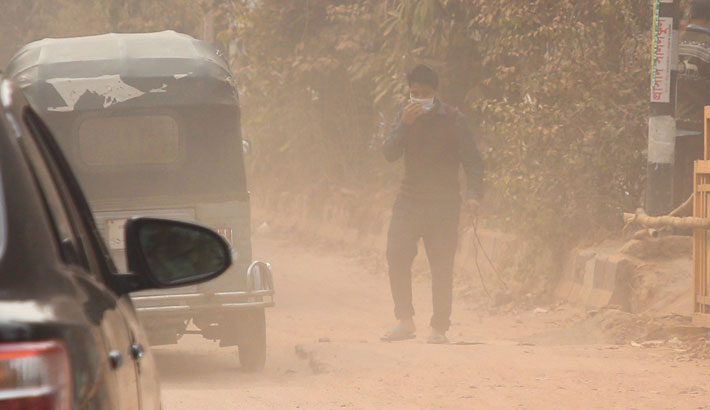 A cloud of dust blows when vehicles pass through Dhanmondi Road No. 27 (old) in the capital on Tuesday. Air pollution has reached an alarming level in the capital during dry season. — Reaz Ahmed Sumon

A transboundary flow of air from the highly-polluted countries is contributing significantly to the pollution and degradation of air quality in Dhaka city.

Particulate-matter pollutants sweep Dhaka city from South Asia throughout dry, monsoon and winter seasons through different routes, the Environment and Social Development Organisation (ESDO) has found in a recent study.

Major routes of wind that carry particulate-matter pollutants towards Dhaka are the middle of India and entered the Dhaka city from the west, air from Iran and the Middle East, several from north Europe, travelled with good height, over Nepal, and enter from the north, some of the wind from India with a long flight and shorter paths and enter from the northwest, said Dr Shahriar Hossain, secretary general of the ESDO.

Northern Indian regions, Nepal and its neighbouring Indian regions and the areas of the Indian state of West Bengal adjacent to the western border of Bangladesh are also highly responsible for contributing to particulate-matter pollution in Dhaka city, he said.

Among Asian countries, only Japan and Singapore have showed promising improvement to control their air pollution problems.

Bangladesh and India are the top two countries among 11 countries which cause the highest amount of pollution around the world in three years (2017-2019).

Both the countries are among the top most air-polluted countries in the world. In addition, Pakistan and China are also contributing enough to air pollution.

Northern Indian regions, Nepal and its neighboring Indian regions, and the areas of the Indian state of West Bengal adjacent to the western border of Bangladesh are also highly responsible for contributing to PM pollution in Dhaka city.

Shahanaj Rahman, deputy director (Air Quality Management) at the Department of Environment, told the Daily Sun that they have also found transboundary movement of polluted air into Dhaka.

The DoE has taken strong initiative and formulated a guideline to reduce air pollution in the country.

Depending upon the heights, air pollutants can travel from 200km to 500km in a specified area. During winter, transboundary movement of air pollutants is at its peak and entering Bangladesh region through Indian belt which is travelling from the northern side of the country (Rangpur, Dinajpur) and ended up in Dhaka, Mymensingh, and Cumilla etc, the study said.

The trajectories normally show that the prime air masses are responsible for higher concentrations at the stations in Dhaka city from November to March (post-monsoon and winter season) which is already mentioned in the previous section.

Depending on the frequency of wind direction in dry seasons (pre-monsoon and post-monsoon), the monitoring stations experience higher pollution from all the directions.

However, higher contributions of fine particles, especially PM2.5 and PM10, are observed from the northwest, north, and northeast directions.

Dhaka has ranked the second worst in the Air Quality Index (AQI) as extreme air pollution makes it one of the most polluted cities. Dhaka showed an average AQI score of 280 at 11:39am on Tuesday, according to IQAir.

India’s Delhi and Pakistan’s Lahore have got the first and third spots in the list of cities with the worst air quality with AQI scores of 344 and 247 respectively.

Bangladesh is a country located in the southern region of Asia. In recent years, it has seen a massive economic growth as well as a population boom.