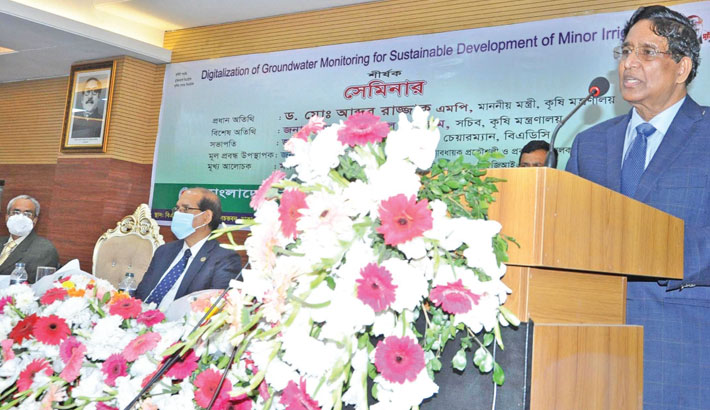 Agriculture Minister Dr. Muhammad Abdur Razzaque speaks at a seminar on “Digitalization of Groundwater Monitoring for Sustainable Development of Minor Irrigation’ at Bangladesh Agricultural Development Corporation (BADC) auditorium in the capital on Sunday.

He made the remark while speaking as the chief guest at a seminar on ‘Groundwater Monitoring Digitisation’ at Bangladesh Agricultural Development Corporation (BADC) auditorium  in the capital on Sunday.

The seminar was organised by BADC under the “Survey and Monitoring Digitalisation Project for Micro Irrigation Development”.

The minister said that following the policies of Bangabandhu, the present government has always been engaged in the welfare of agriculture and farmers.

After independence, Bangabandhu had placed a great emphasis on the revolution of agriculture and took groundbreaking steps to the expansion and development of irrigation, he added.

According to BADC, the irrigation area has been expanded to 1.05 million hectares in the last 10 years. The canal has been re-excavated for 9456 km, Irrigation canals have been installed at 13,351 km and 10 rubber dams and one hydraulic elevator dam have been constructed. Agriculture Secretary Mesbahul Islam was the special guest at the programme while BADC Chairman Md Sayedul Islam presided over the seminar.