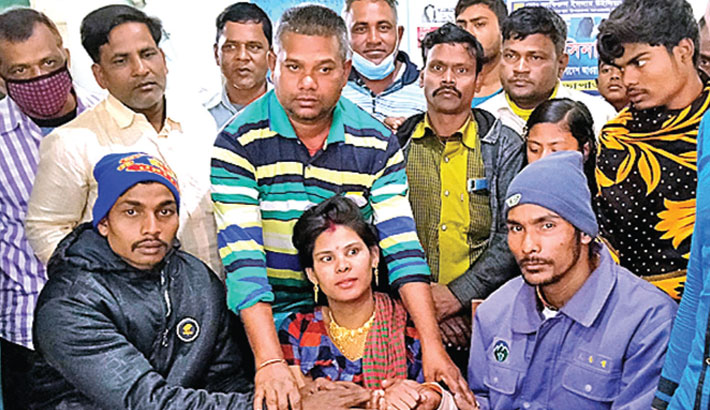 After coming to know about mentally challenged Durga Rani, a resident of Dinajpur, through a Facebook post, her family members receive her from Tangail’s Asaduzzaman Rony, who provided her shelter 11 years ago when she was lost from her home. The photo was taken on Thursday in Tangail. —sun photo

She was wandering aimlessly in Dhubria Bazar of Nagarpur upazila in Tangail district sometime in 2010 when a kind-hearted man approached her.

As she could not exactly say anything about her name and address upon interrogation for being mentally challenged, Asaduzzaman Rony, current president of Dhubria Bazar Traders’ Association, took her to his house, gave her a name (Laily) and provided her a shelter to live in.

Leaving her home and family members in Dinajpur, the woman somehow reached Dhubria 11 years ago.

For the last 11 years, Rony and his family members took care of her and tried their best to know where ‘Laily’ came from but in vain.

With the help of social media platform Facebook, Rony has recently located the address of the mentally challenged woman and handed her over to her family who came to his house all the way from Shostitola Shahidul Colony in the district town of Dinajpur on Thursday.

“I desperately tried to trace her address. I wrote about the matter on Facebook and posted her picture. Finally, I’ve found her address with the help of Awami League leader Awlad Hossain Liton,” Rony said.

When Rony approached Liton, he discussed the matter with his brother

Dilip who resides in Dinajpur.

When the post came in the notice of Harijan community members in Dinajpur, they identified the woman as Durga Rani and informed her family of the matter.

Durga’s husband Ramesh Harijan, who had been searching for her for years, contacted Rony and came to know about his lost wife.

Finally, he along with his brother-in-laws came to Tangail to take back Durga.

“I have no word to express my gratitude to Rony vai. I’ll remain grateful to him for the rest of my life as he provided shelter for my wife and took proper care of her. He has set an outstanding example of humanity,” Ramesh said while talking to reporters.

“Now, I’m taking my wife to my house where my two daughters are waiting to meet their mother after all these years,” he added.