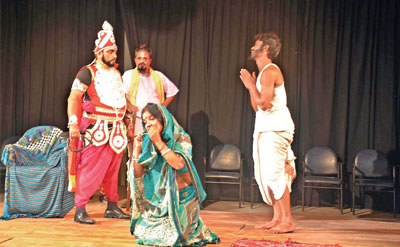 It is now difficult to have the feelings of those winter nights for the people who have never gone to enjoy the performance of Jatra artistes, skipping the eyes of their parents.

Besides social and historical stories and appealing music, Jatra artistes once held the audience spellbound by their attractive performance. The audience also spent sleepless nights under the Jatra pandals.

However, the golden days of Jatra palas have gone. The Jatra artistes are now struggling for their survival. The traditional folk theatre, which is on the verge of extinction for various reason such as gambling and vulgar dance, are now facing another blow due to ongoing corona pandemic. The Jatra artistes are also leading a miserable life as staging of Jatra palas have been remain closed.

Since the seventh day of Durga Puja, usually the season of Jatra pala begins. Before the season starts, transfer of Jatra artistes from one troupe to another take place every year. But due to the spread of coronavirus in the country, all types of arrangements regarding Jatra palas have been restricted since March last year.

Gram Bangla Natyo Shongstha’s owner and director Amzad Hossain said, “We, the Jatra artistes, have been struggling for the years for various reasons. Yet we were trying to survive. But the ongoing wave of coronavirus pandemic has devastated our life. We don’t know when we will be allowed to perform before large audience again.”

At least 40 people, including actors, musicians and makeup men, work for a Jatra troupe. There are around 300 Jatra troupes in the country. It means the total number of Jatra artistes in Bangladesh is over 12,000. Losing their only source of income many of them are now doing odd jobs.

These Jatra artistes are working as rickshaw pullers, cooks, masons, barbers, and small traders. Some of them have taken loans from money lenders at high interest rates to run their families.

After performing 20 years on stage as an artiste, Bina Rani Das is now struggling to survive.

While talking to the Daily Sun, she said, “What would I do if I’ve no work. I don’t know anything except acting. My little daughter is ill but I can’t afford her treatment. I’m somehow running my family with the money I have borrowed. In search of work I’ve communicated with the owner of my troupe but there is no sign of arranging new shows.”

Abdur Razzak, who played trumpet professionally for Modhumita Opera till the corona breakout in the country, is now selling vegetables at a makeshift market in capital’s Khilgaon Rail gate area.

He said, “I’ve struggled throughout my life but have never faced such a crisis. This is unbearable. Only God knows how I’ve survived in the last 10 months.”

Most of the Jatra artistes are going through similar situation.

Former president of Jatra Shilpo Unnayan Parishad Milon Kanti Dey said, “Almost all the branches of art are hit hard by the coronavirus pandemic. The artistes of other branches have already began shooting again or performing online. Jatra artistes don’t have this scope.”

“As a form of theatre, the Jatra artistes never got proper attention. Around 200 Jatra artistes have got financial support from the government-declared stimulus packages so far which is quite inadequate. The authorities concerned must come forward to save this industry,” he added.