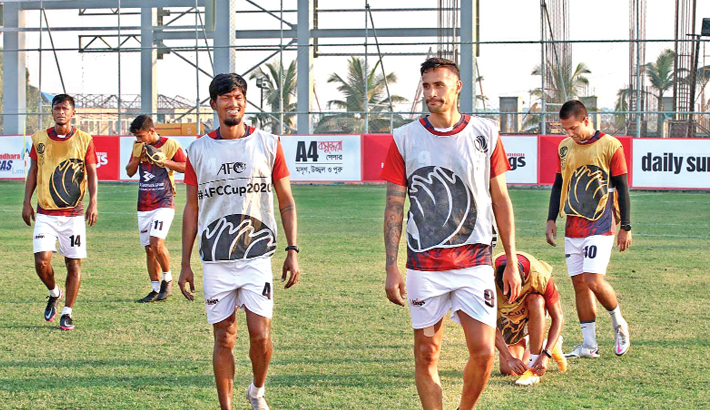 Bashundhara Kings captain Tapu Barman, left, along with Argentine forward Raul Oscar Becerra and other team-mates are seen during a training session at the club premises in the city's Bashundhara residential area on Tuesday. –Sun photo

Kings are passing an unbeaten run in the ongoing tournament as they reached semis after beating Sheikh Jamal Dhanmondi Club Limited 2-0 in the third quarter-final on January 3.

Kings Spanish coach Oscar Bruzon claimed that they needed to play a high-intensity game against Abahani as the opponents played negative football during the tournament.

“They (Dhaka Abahani) play negative football – interruptions, faults, disputes and fights. We have to be very focus in this game,” Oscar said during an interaction with media on Wednesday.

“They will try to stop us that way but we are well aware and concern. We need to play a high-intensity game. In that circumstances we will surely beat them,” Oscar added.

The 25-year old Brazilian forward Robinho promised to play his best against Abahani in the semis.

“Abahani have two good players. They are Brazilians, they have high quality. Their target is helping the team. I’m also trying to help the team. If it is possible, I will try to score the maximum goal as possible,” said Robinho.

“I will try to help my team-mates to score goals also. I promise to play my best in the match,” he added.

Abahani Portuguese coach Mario Lemos believed that the match is going to be interesting as both sides have equal chance to win the game. “It’s going to be a good match between two good teams. Both teams will try to win. Brazilian striker Francisco Torres has been improving day by day. The more he plays the better he will be,” he said.

“We have two Brazilians, Kings also have two. It’s interesting. They (all four Brazilians) are very technical players. It will be nice to watch their game,” Lemos added.