An affectionate mother or a clever woman? 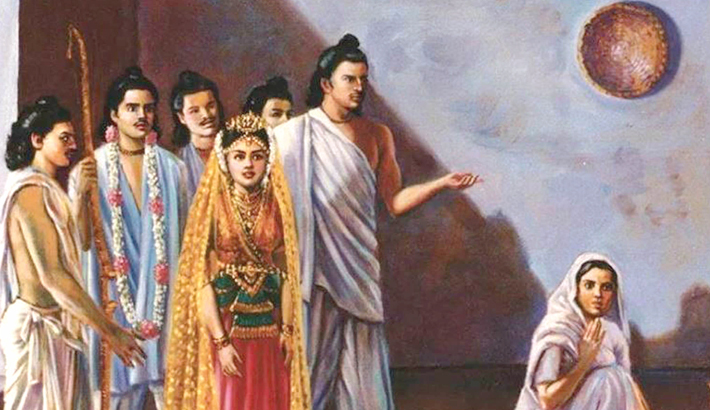 Kunti is an important name among commonly known female characters in Mahabhrat. Kunti (alias Pritha) was biological daughter of Shurasen (a Yadav chief) and foster daughter of his cousin Kuntibhoj, paternal aunt of Krishna, Balaram and Subhadra. Her father gave her to his childless cousin Kuntibhoj. She was very beautiful and intelligent. She was married to Pandu, King of Hastinapur and was the mother of Karna and the Pandavs -Yudhishthir, Bhim, Arjun. She was step mother of Nakul and Sahadev. Once sage Durvasa visited Kuntibhoj. Being highly pleased with the hospitality Kunti, he granted her a hymn that would invoke any god of her choice and he would bless her with children. Failing to restrain curiosity Kunti invoked the Sun god. He begot her a child but restored her virginity. Surprisingly, the child was born with  armour but out of fear of social shame Kunti abandoned the child who later became famous as Karna.

As per tradition of that time swyambhar sabha (a meeting where the bride chooses her husband) was arranged for her. She chose Pandu, king of Hastinapur. Shortly after marriage, with a mission to expand empire, Pandu married Madri, a princess of Madra. Madri took Kunti inferior to her because Yadavas were cattle herders while she was a princess. Though embarrassed at her husband’s act Kunti eventually reconciled with him.

One day, while hunting, Pandu mistakenly shot and killed sage Kindama and his wife as they were mating in the forest taking the form of deer. The dying sage told Pandu that he had not only killed them in the midst of lovemaking but was not remorseful for his action. He cursed that any attempt to be intimate with wife would cause Pandu’s death.

Because of that curse, Pandu could not make love with his wives. Being remorseful he renounced the kingdom and went to exile with his wives. He met some sages and asked them a way for heaven and salvation. They informed that without children none can aspire for heaven. When Pandu expressed to Kunti his apprehension of dying childless, she mentioned the boon granted to her. Getting consent from Pandu she invoked  three gods and gave birth to three children - Yudhishthir  by Dharrma (God of Justice), Bhim by Vayu (God of Wind) and Arjun by Indra (the king of heaven).  Moreover, she invoked Ashwins for Madri and Madri became mother of twin sons - Nakul  and Sahadev.

One day, forgetting the curse, Pandu attempted to make love with Madri, but eventually he died. Out of a sense of guilt that she was the cause of this death, Madri committed sati. Helpless Kunti took care of five Pandav children taking them back to Hastinapur. As rivalry between Pandavs and Kauravs mounted she decided to go back to Kuntibbhoj, but Bhisma restrained her.

Pandavs and Kunti were invited back to the kingdom and the kingdom was to be shared with Kauravs. In a swyambarsabha, Arjun won Draupadi as wife. Coming home back he told Kunti that they had brought something unique for her. Kunti was inside the house. Without noticing the thing she said to divide it among five brothers. Instantly Draupadi, who married Arjun, became a common wife of five brothers (please read - husbands) When Pandavs lost the kingdom in a game of dice and were compelled to go to exile for 12 years, Kunti was forced by King Dhritarashtra to remain in the capital. She chose to stay at Vidur‘s house, instead of the palace. After the Kurukshetra war, Kunti moved to a forest near the Himalayas with Vidur, Dhritarashtra and Gandhari. There they were perished in a forest fire and attained heaven.

Kunti may be evaluated in many ways. She was the mother of three sons by three fathers. There is controversy regarding paternity of her first son Yudhistir. It is normally known that he is the son of Dharma (God of Justice), but Protiva Bose has analysed it in a different way. She has mentioned that handing over the responsibility of kingdom to Dhritarashtra, Pandu went away to the Himalayas with Kunti and Madri. Vidur often visited there in the name of looking after them, but actually for Kunti because he had a secret (please read - illicit) relationship with Kunti. Protiva Bose has established that not Dharma, but Vidur was the father of Yudhistir (Mahabharater Maharanye, page 37, 62).

Everybody has a role to play in the stage of the world. Kunti also played it. She was the force of unity among five brothers. It is said that after the birth of Nakul and Sahadev, Kunti did not share the boon again with Madri apprehending that Madri’s children might outnumber her own sons. However, she brought them up like her own sons. It is because of her, Draupadi had to bear the stain of polyandry till death.

Karna was born with undecaying amulet and bangle. Krishna knew that Karna alone was sufficient to destroy the Pandavs. If Karna remains alive then there will be no possibility for the Pandavs to win in the Kurukshetra War. So, being suggested by Krishna, Kunti approached Karna, her first but abandoned son just ahead of beginning of the war. Introducing herself as his mother and addressing him as her eldest son, she requested Karna to join the Pandav side but Karna, ever loyal and grateful to Duryodhan, declined to be renegade. Kunti then begged the armour. Intelligent Karna realised everything, but during prayer he never refused anyone. So, knowing death for certain he gave away that armour to Kunti. Moreover, he promised not to kill his brothers except Arjun. Shrewd Kunti then asked for another promise that he would not use the same deadly weapon twice against Arjun. In return, Karna requested Kunti to keep their relationship secret and promised that at the end of the war she would still have five sons, the fifth one be either Arjun or Karna. In this connection we can remember a unique poem Karna Kunti Sangbad by Rabindranath Tagore. However, due to other reasons Karna was killed by Arjun.

After the war, Kunti disclosed the secret of Karna’s birth. Everybody was shocked to learn that they committed fratricide, but Pandavs were furious with Kunti. Yudhisthir cursed Kunti and womenfolk that they would be unable to keep anything secret. Through that tactful act of approaching abandoned son, surpassing motherhood, her clever character stands dominant.