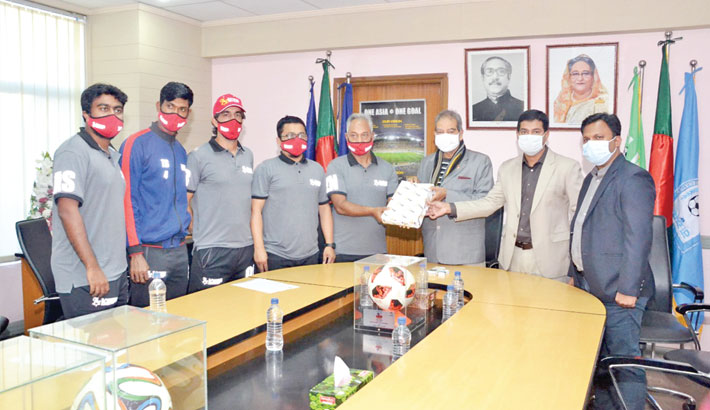 Kings Head of Strategy and Planning Bayazid Alam Zubair Nipu told The Daily Sun that they registered a total of 28 players including 13 national booters and 4 foreigners. “Players are all fit and ready to play. There are no other serious injuries except Sushanto Tripura and Tariq Raihan Kazi. They may not be able to play in Federation Cup. Topu Barman got injured during Bangladesh-Qatar match, but he is recovering,” he added.

The 43-year-old Spanish coach believes that his players were far better than other team players in terms of fitness and preparation.

“I’m very happy that we had the chance to practice from August. So, from our side there is no complaint, no excuse. We are a balanced team with good recruitments. We are a fresh team and I feel that we are far better than last year. Many clubs are facing the problems in terms of fitness.  I feel our players are much better off than other players because we have continuity in training. We not only train to keep fitness, but we have trained on technical side, by position, by line,” said Oscar.

“In our group, we are going to face the runners-up of last season and Chattogram Abahani to whom we lost in the last game of the season. We want to start afresh. This is our ‘do or die’ competition. We are fully determined and confident and we are happy with our recruits. The combination between local and foreign players is our strongest point. I think we brought foreign players according to the strengths of our local players. We are covering key positions. So, our prediction is that we are going to do very good in the Federation Cup,” Oscar added.

About the opponents, the Kings coach further stated, “When you face competition, you need to be clear about your opponents, your rivals. So, of course, we are doing daily reports, analysis on them and finding who they are recruiting. I have not seen other teams' preparation So, I can’t make comments on that. But what I can see is that these squads are full of good players both, local and foreigners. So, the competition is not going to be easy.”

The domestic season 2020-21 will kick-off with the Walton Federation Cup 2020 at Bangabandhu National Stadium in the capital from December 22. A total of 13 teams, split into four groups, are expected to take part in the season’s curtain-raiser meet.