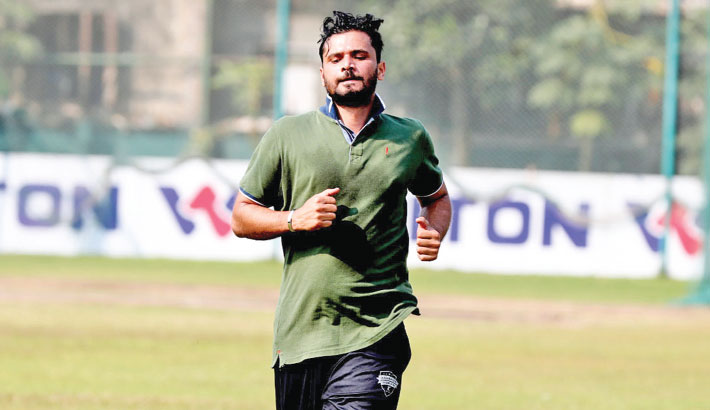 Mashrafe is making a return to competitive cricket after a gap of eight months.

“We are delighted to have Mashrafe Mortaza in our Gemcon Khulna squad. Despite Narail being a district of Khulna Division, he did not play for Khulna (in any franchise leagues), I hope the team will perform better and the players will be encouraged to have him beside them,” Gemcon Khulna Managing Director Kazi Inam said after being confirmed to have the services of Mashrafe in the lottery on Sunday.

Four out of five teams participating in the ongoing Bangabandhu T20 Cup had expressed their interest to rope in Mashrafe following his availability after recovering from injury.

BCB was forced to put his name into lottery after several teams showed interest in him that began with Fortune Barishal as they were the first team to show interest in him.

Later, Gemcon Khulna, Minister Rajshahi and Beximco Dhaka also expressed their interest while table toppers Gazi Group Chattogram were the only side which had refrained from joining the race. Mashrafe passed the fitness test on Sunday to make him eligible for the competition.

“He passed the fitness which made him eligible for the lottery,” Bangladesh Cricket Board (BCB) Chief Selector Minhajul Abedin Nannu told reporters on Sunday.

BCB initially did not include Mashrafe’s name in the draft list due to his knee injury but had kept a provision for him to take part in the competition as they announced that he can be included outside the draft to participate in the ongoing competition, subject to the state of his fitness.

Previously, Mashrafe did not take part in the BCB President Cup, the 50-over three-team tournament held ahead of the ongoing domestic T20 tournament, after testing positive for corona.

Bangabandhu T20 Cup Technical Committee Chairman Jalal Yunus said that they had put his name in lottery as more than one team showed interest in him.

“As more than one team is interested in him, we had to put his name in lottery because there should be a level playing field for all the sides,” said Jalal.

Officials confirmed that Mashrafe will be put in A-grade (BDT 15 Lakhs) while his remuneration will be decided on pro-rata basis as he is joining in the middle of the tournament.

The players were divided into four categories for the players’ draft with Grade B players picking BDT 10 Lakhs while Grade C and D will receive BDT 6 and 4 Lakhs respectively.