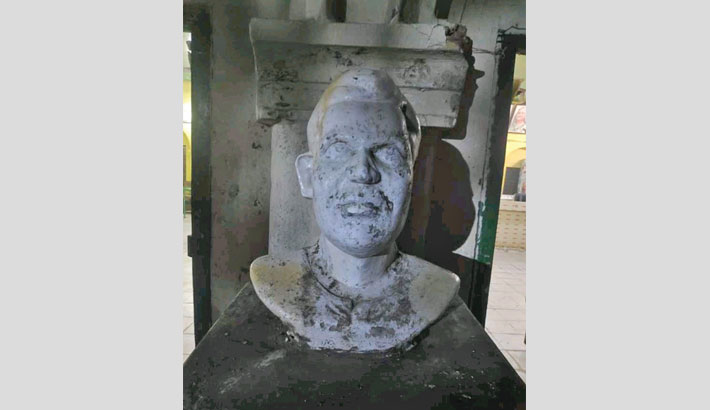 The sculpture of Madhusudan Dey, popularly known as Madhu Da, was partially damaged on Wednesday night.

The sculpture of Madhusudan Dey was partially damaged by some unknown miscreants on Dhaka University campus on Wednesday night.

The left ear of Madhu’s sculpture, placed in front of the iconic cafeteria named after him on the DU campus, was found broken and it was repaired at midnight.

Arun Kumar Dey, youngest son of Madhusudan Dey and current operator of Madhur Canteen, said, “I was busy inside the canteen. Around 7:45pm, one of my staff suddenly noticed the partial damage of the sculpture and told me about it. Immediately, I informed the matter to Dhaka University proctor and officer-in-charge of Shahbagh Police Station. They visited the spot and took measure to repair it.”

When asked about the incident, DU Proctor Prof AKM Golam Rabbani said, “It is not yet known if the sculpture was hit intentionally or unintentionally. The authorities concerned have been asked to investigate the matter.”

Madhusudan Dey, who was fondly called as Madhu da, was far more than a mere cafeteria operator.

He had always kept the doors of his canteen open to accommodate all progressive minds and nurture their thoughts and dreams.

During the Pakistan era, before every political movement, student leaders and activists used to gather at his canteen situated on the Dhaka University campus and conducted movements from there.

He had to pay the price for this. After the military crackdown on the fateful night of March 25, 1971, Madhusudan Dey was brutally killed by the Pakistan Army with his wife, eldest son and daughter-in-law.

Following the independence of Bangladesh, the canteen was formally renamed as Madhur Canteen.

In honour of Madhusudan Dey’s contributions and memory, a sculpture of him was inaugurated before the canteen on April 18, 1995. Sculptor Toufiq Hosen Khan engraved it.

Madhu da’s sculpture, along with his famous canteen, has been reminding the students about our glorious history of struggle and sacrifice for liberation.

The damage to the sculpture has happened at a time when a group of fundamentalists, backed by Hefazat-e-Islam, has threatened to throw away the sculpture of Bangabandhu Sheikh Mujibur Rahman into the Buriganga River.

And they have declared that ‘statues’ are against the Sharia and they will pull down all the statues of the country.

Therefore, analysts are observing the nasty hands of radicals behind this incident.

They have said this group of religious zealots has dared to commit such sabotage because of the continuous compromise of the government with them.

It is mentionable that supporters of Hefajat-e-Islam first conducted programmes against setting up a Baul sculpture in the airport intersection in 2008 with the banner of ‘Murti Protirodh Committee’.

During that caretaker regime, they forced the government to take defensive strategy by placing a different sculpture there.

Instead of taking steps to modernise the syllabus of Qawmi madrasas, they made 29 changes in the Bangla medium textbooks following Hefazat’s recommendations.

In the face of their demands, the government relocated the sculpture of Greek Goddess Themis from the Supreme Court premises in 2017.