World leaders call for action to stop abuse against women 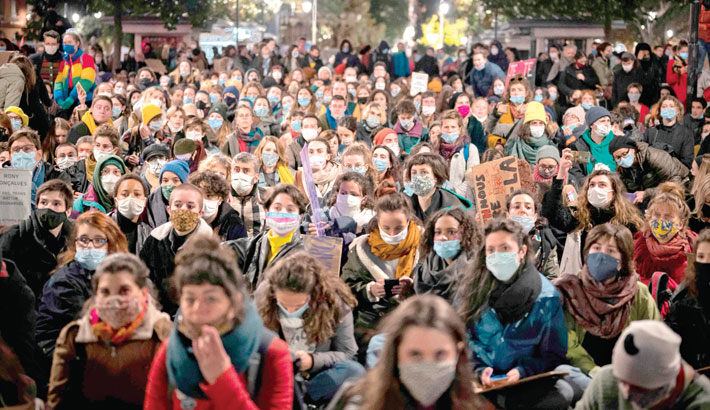 Protesters sit as they gather in Toulouse, France on Wednesday, during a demonstration against patriarchal violence marking the International Day for the Elimination of Violence against Women. —AFP PHOTO

BRUSSELS: In a global push to end violence against women, activists held rallies on Wednesday and world leaders called for action to stop the abuse, which worsened because of the coronavirus pandemic this year, reports USA TODAY.

Protests from France to Ukraine were held on the International Day for the Elimination of Violence against Women to draw attention to domestic violence in what is an uphill struggle to protect millions of women killed or abused every year by their partners and close relatives.

In Rome, the office of the prime minister was lit in red and red banners tumbled from trade union offices in Florence to demand an end to violence against women. Italy was a hotbed for COVID-19 infections this year, forcing the government to impose lockdowns to keep the virus out. In an unintended consequence, domestic violence cases began to grow.

“Because of the restrictions, we involuntarily created profound distress,” that led to increased episodes of domestic violence and femicide, Prime Minister Giuseppe Conte told a parliamentary discussion on Italy’s long-standing problem with violence against women.

The Italian Health Ministry, citing data from national statistics agency ISTAT, said calls to domestic violence hotlines shot up during the lockdown, registering a 75 percent increase compared to the same period in 2019. Between March and June, calls and text messages to the anti-violence number more than doubled during the same period, to 119.6 percent

Together with Spanish Prime Minister Pedro Sánchez, Conte signed a joint declaration vowing to accelerate measures to stamp out violence against women, which they called “an invisible pandemic.”

Even if detailed statistics were hard to come by, organizations and countries, from the United Nations to the European Union, France and Britain, all said that the pandemic had so far been an additional source for men to mistreat women.

In Ukraine, the Femen feminist activist group staged a protest outside the president’s office with a topless protest before being dragged away.

“We want to illustrate the situation with women’s rights in Ukrainian society — unprotected from any violence. We think the violence against women is a human rights violation,” Femen activist Anya Alian said.

UN agency UNAIDS said that “evidence shows that the COVID-19 pandemic has resulted in significant increases in gender-based violence in nearly all countries,” especially for women trapped at home with their abuser. “Men’s violence against women is also a pandemic — one that pre-dates the virus and will outlive it,” said Phumzile Mlambo-Ngcuka, executive director of the UN Women agency.