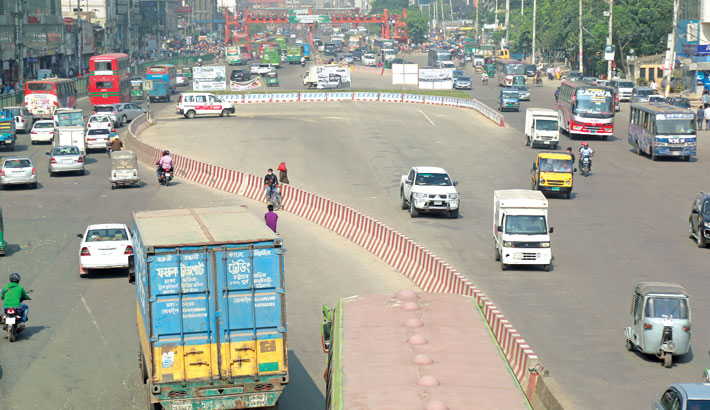 Vehicles can easily take a turn without disrupting traffic on a busy road after construction of a U-turn in the capital’s Uttara area. The photo was taken on Thursday. — Reyad hossain

Three U-turns are contributing to easing huge traffic gridlock on Tejgaon-Abdullahpur route in the capital, thanks to the government’s measures to relieve commuters of immense sufferings.

Three U-turns have been open to traffic on the busy route while seven more on the same road are under construction.

The government has undertaken the project involving Tk 318 million to construct 10 U-turns at different points in the capital in order to ease traffic congestions.

According to the Revised Strategic Transport Plan, commuters waste around 5,000,000 working hours on the gridlocked streets in the capital a year with a loss of Tk 370 billion.

Commuters have started to get benefits as the three U-turns --- two at Uttara and another at Khilkhet -- have remained open to traffic.

The construction work of the remaining U-turns will be completed by December this year.

Drivers and passengers have expressed satisfaction as their time to reach their destinations has been reduced to a great extent.

Once, a 16-km journey from Satrasta of Tejgaon to Abdullahpur was a nightmare for commuters as it takes several hours due to heavy gridlock at different crossing points.

In the short distance, there are around 10 crossing and 17 small turning points which create gridlock frequently.

Now, the scenario has changed totally as Dhaka North City Corporation (DNCC) has constricted and opened few U-turns on the busy route.

“It was the worst experience of my life while passing by the airport crossing. Every day I have to attend my office at Baridhara. I had to lose many hours on the crossing due to heavy gridlock,” said Elias Hossain, a private jobholder of Uttara-12 sector.

He also said U-turns at Rajlaxmi and Uttara RAB-1 office have reduced the picture of traffic gridlock as no traffic has to wait anymore.

“They can change their directions using the U-turns without any intervention of traffic police.”

“Usually the normal mobility of traffic on the route was 5-7km per hour due to heavy gridlock at some points. We’ve designed the project in mind. If all the U-turns are built, mobility will stand at 20-25km per hour,” said mass transport expert Saleh Uddin Ahmed.

“Besides, there will have the necessity to traffic police at the point of turning because north- and south-bound traffic will use the median corridor. Tariff police will be required only for the points where traffic changes multiple directions and feeder roads,” he added.

He also said that frequent crossings on the busy route cause huge traffic gridlock, that’s why many countries embrace the concept of U-turn as solution to the problem.

Earlier, a budget of Tk 248 million was fixed for 11 U-turns and later one U-turn at Sahora was cancelled due to the work of elevated expressway and the budget was revised as Tk 318 million.

But after the death of the mayor, the project faltered due to land disputes of the DNCC with roads and highways, civil aviation authorities and railways.

With the intervention of new mayor Atiqul Islam, the project resumed with the revised design as per requirements of metro rail, elevated expressway projects and Dhaka Transport Co-ordination Authorities.

Finally, in 2019 two U-turns at Rajlaxmi and RAB-1 office were opened.

DNCC Mayor Atiqul said, “If the U-turns are opened, around 70 percent travel time of commuters can be saved. People will be hugely benefitted.

He has also vowed to open all the U-turns by 31 December this year.

During the recent visit, it was seen that the U-turns under construction are being used by public transport to change road directions.

“Commuters are enjoying happy ride without any tariff gridlock.  Jobs of transport workers and traffic police have become easier for opening the U-turns. All are praising the U-turn project. The DNCC is also beautifying the U-turns with planting trees.”

Asked if the U-turns narrow down the width of roads at some points and thus cause traffic jams, he replied, “While revising the project design, we’ve taken the issue into consideration like the comparatively less width road of Mohakhali and Banani. We’ve addressed the issue as per our planning.”