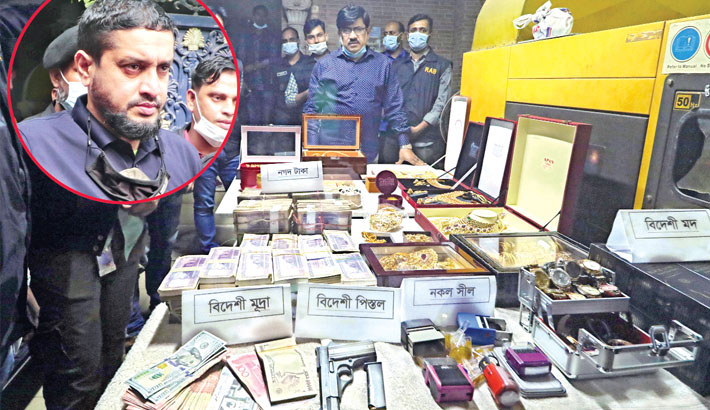 A mobile court of the RAB-3 led by Executive Magistrate Palash Kumar Bosu conducted the drive at his house at Merul Badda and his car shop, Auto Car Selection, on Progati Sarani between Friday night and Saturday morning.

Lt Col Ashique Billah, director (legal and media wing) of the RAB, disclosed the information at a press briefing in front of Golden Monir’s house around 11:30am on Saturday.

Golden Monir owned wealth and properties worth Tk 10.5 billion (1,050 crore). He has about 200 plots at Badda, Purbachal, Nikunja, Uttara and Keraniganj, said Ashique Billah, adding that he admitted to having 30 plots.

He managed to get papers and documents of the government plots with the help of some dishonest employees and officials of Rajdhani Unnayan Kartripakkha (RAJUK), the RAB spokesperson said.

Golden Monir, the RAB officer said, was a financer of a political party and many leaders of that party helped him carry out such illegal activities in exchange for financial benefits.

According to the statement of Ashique Billah, Monir worked as a salesman at a cloth shop in Gausia Market in 1990s.

Monir had a schedule to go to Dubai in Dubai Airlines (EK-585) at 11:00am on Saturday, but before that he was captured, the officer continued.

“Leaving the job at the cloth shop, he joined a crockery shop at Mouchak Market. At that time, he got acquainted with a luggage trader and began dealing in luggage. In the guise of luggage trading, he began importing cloths, cosmetics, electric items, computers, mobiles, watches and other things in luggage evading taxes. He used Singapore-India-Bangladesh route for such illegal activities. Gradually, he started gold smuggling and hundi trading,” he said.

“Afterwards, he began to operate a jewellery shop at Baitul Mukarram. The shop helped him sell the smuggled gold. With the passage of time, he became a notorious gold smuggler and people started to call him Golden Monir.”

Several cases were filed against Monir with various police stations in the capital on charges of smuggling and hundi trading in 2007.

In 2019, the RAJUK filed a case against him for possessing 70 files of RAJUK flats illegally. The Anti-Corruption Commission (ACC) filed graft cases against him for amassing wealth and properties through illegal means.

The senior RAB officer said during primary interrogation, Golden Monir said that he started to grab land after making good relation with a minister, officials of Ministry Housing and Public Works and RAJUK in 2001.

The spokesperson of the RAB said that the force would try to find out the people who helped Monir in his illegal activities.

The officer said that the political leaders who took financial help from him would be found out.

Process is underway to file three separate cases against him with Badda Police Station.