As the COVID-19 ravaged 2020 counts down to an end, the Indian Premier League, delayed, deferred and distanced by coronavirus, also is on a countback towards culmination, as the 60th match of IPL 2020, the final, pits defending champions Mumbai Indians against title aspirants Delhi Capitals when the two sides meet up at the Dubai International Cricket Stadium on Tuesday. Several things are different -- for one, the final is being played on a Tuesday instead of a Sunday. Then, the teams are in their restrictive bio-bubbles and no one barring the team members and franchise owners are there to witness the goings-on, reports NDTV. 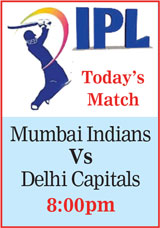 The other new thing is the Delhi Capitals are one match away from being somewhere they have never been -- the IPL winners' podium. As for Mumbai Indians, things are a little different too. They have the chance to beat their "even-number" year jinx.

As has been seen all through IPL 2020, and previous years, the law of averages always seems to catch up. Take the case of SunRisers Hyderabad. They won three massive matches to make it to Qualifier 1, including beating Delhi Capitals, and then they fell, one step from the final.

DC's equation with MI is the same. The two sides have met thrice this year, and all the matches have gone to the Mumbai outfit.