Bangabandhu is synonymous with Bangladesh 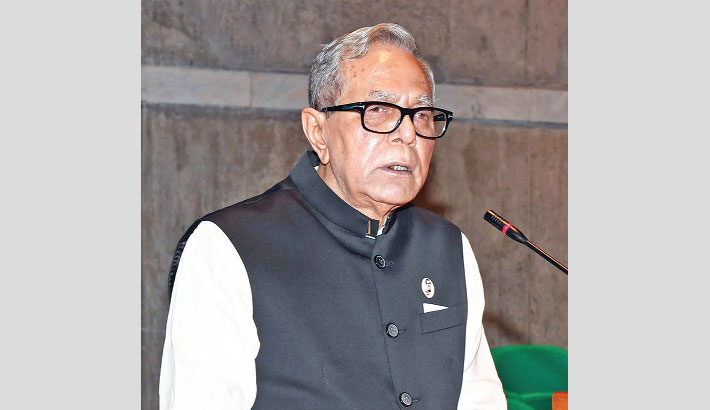 President Md Abdul Hamid on Monday said there is no scope to look at Bangabandhu and Bangladesh separately.

“One has to know about Bangabandhu in order to know Bangladesh, the struggle for freedom of the Bangalees and the liberation war. Those who tried to look at these two phenomena separately have failed. Today’s reality is the biggest proof of that,” Hamid said while delivering his address in the historic special session of Parliament with Speaker Dr Shirin Sharmin Chaudhury in the chair.

The special session has been convened to mark Mujib Year, the birth centenary of Father of the Nation Bangabandhu Sheikh Mujibur Rahman. The session was supposed to be held in March last but it was postponed due to the coronavirus outbreak.

Addressing the House, the President urged the political parties to nurture the culture of tolerance of others’ opinions, show mutual respect, and attach due importance to others’ views in order to give an institutional shape to democracy.  He said Bangabandhu Sheikh Mujibur Rahman is not merely a name.

“Bangabandhu is an institution, an entity, a history. An invisible Bangabandhu is much more powerful than a living Bangabandhu. As long as Bangladesh remains, the Bangalees live, the people of this country remain, Bangabandhu shall remain as a source of inspiration for all,” he said.

“He will continue to illuminate the world as a luminous torch of freedom for the oppressed people of the world. Therefore, everybody should take initiatives so that our future generation can grow by drawing inspiration from the principles, ideologies of Bangabandhu and the spirit of the liberation war,” he added.

The President stressed the need for forging the unity to reach the benefits of the freedom to the doorsteps of all.

“Unity is needed most for building the ‘Sonar Bangla’ of Bangabandhu – a unity of the people, especially of those on the side of the liberation war. The unity that brought us together in 1971, that unity has to be forged against communalism, undemocratic behaviour and violence,” he said.

“By getting imbibed with the spirit of 1971, we shall have to build up resistance against those who seek to hinder the trend of advancement in the country through confusion-mongering and derailing the simple-minded people of this land by denying the reality and concocting imaginary stories and situations. Only then would the ‘Bangla of Gold’ as dreamt by Bangabandhu materialise, and the celebrations of his birth centenary become meaningful,” he said.

Reminiscing about Bangabandhu, the President said the Father of the Nation Bangabandhu Sheikh Mujibur Rahman had a huge heart.

“He used to dream himself, and also made other people dream. His confidence, love and faith in his countrymen were infinite. He repaid the love of the people of Bangla by sacrificing his own life. He has made the Bangalee nation indebted to him,” he said.

The President said the decision to observe the Mujib-Year from 17 March 2020 to 17 March 2021 starting from his centenary of birth is very significant.

The life and deeds of Bangabandhu, his thoughts, ideas and philosophy have to be disseminated among the younger generation of Bangladesh and across the world through observance of the Mujib-Year, he said.

Referring to Bangabandhu’s historic March 7 speech, Abdul Hamid said Bangabandhu had said in his historic 7 March speech, “You shall not be able to suppress the 7 crore people”.

“Although the Covid-19 pandemic has temporarily hindered the trend of our development and advancement, it could not halt this progress. I am optimistic that the Bangalee nation shall advance towards its desired goals by overcoming all hindrances, including Covid-19, under the capable leadership of Prime Minister Sheikh Hasina, and build a happy and prosperous ‘Bangla of Gold’ as dreamt by Bangabandhu,” he said.

Abdul Hamid said the autobiographical books such as “The Unfinished Autobiography of Bangabandhu’, ‘The Prison Diaries’, 'The New China as I Saw it’, edited and  published with earnest interest by the honourable Prime Minister, have created immense opportunity for the new generation at home and abroad to know about the life and work of Bangabandhu.

“I hope that the country's eminent politicians, historians, academics, researchers and journalists will contribute significantly in disseminating Bangabandhu's biography, work and ideals worldwide,” he said.

“Let the nation advance forward on the path of building a hunger and poverty-free Bangladesh by embracing the spirit of liberation war and the ideals of the Father of the Nation; let the nation succeed in dropping its anchor on the shore of Bangabandhu’s Sonar Bangla,” he added.