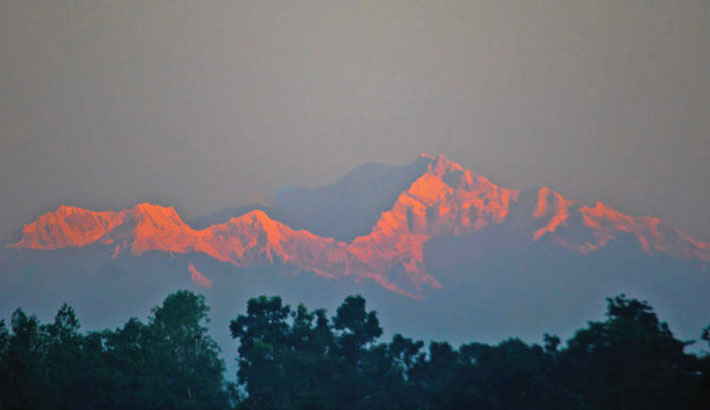 PANCHAGARH: The magnificent view of Kangchenjunga, the third tallest mountain of the world, is being seen from Panchagarh’s Tentulia upazila.

The view is usually seen in early November. But this year, it is now clearly visible in the late October.

Residents in the upazila enjoyed the beautiful scene on Thursday morning. Some of them claimed that they saw the view in early of this year too.

The snow-white Himalaya Mountain and Kangchenjunga peak float in the cloud-free blue sky in winter from October till November.

People get fascinated by seeing the rare beautiful scene of the mountains in front of their eyes. Visitors started coming to the upazila to enjoy the peak blazing in light sunshine during sun rise.

A multiple spectrums were seen in the peak when sun ray falls on it. At first, it consists of black colour, gradually turned into light red and then, into orange and finally it becomes white. The sunshine dancing on the pyramid-like peak astonished the nature lovers.

The scene can also be seen when the sunshine falls in the late afternoon.