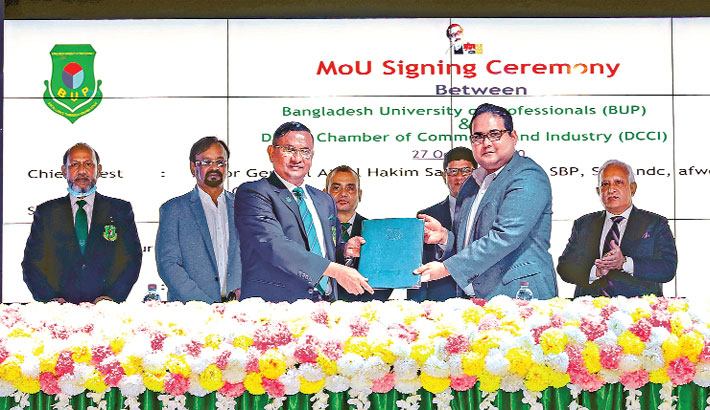 Bangladesh University of Professionals (BUP) Vice-Chancellor Maj Gen Ataul Hakim Sarwar Hasan and Dhaka Chamber of Commerce and Industry President Shams Mahmud are seen at an agreement signing ceremony at Bijoy auditorium of BUP at Mirpur Cantonment in the capital on Tuesday.

Dhaka Chamber of Commerce and Industry (DCCI) signed a Memorandum of Understanding (MoU) with Bangladesh University of Professionals (BUP) at Bijoy auditorium of BUP at Mirpur Cantonment in the capital on Tuesday.

Office of the Evaluation, Faculty and Curriculum Development (OEFCD) of BUP organised the signing ceremony, said a press release.

Professor of BUP Bangabandhu Chair Prof Dr. Syed Anwar Husain was present as the guest of honor. They also signed the MoU on behalf of their respective institutions.

Vice-Chancellor of BUP Maj Gen Ataul Hakim Sarwar Hasan, in his speech requested DCCI to put forward the criteria of skills that actually needed for the industry so that academia can provide the curriculum according the demand of the business sector.