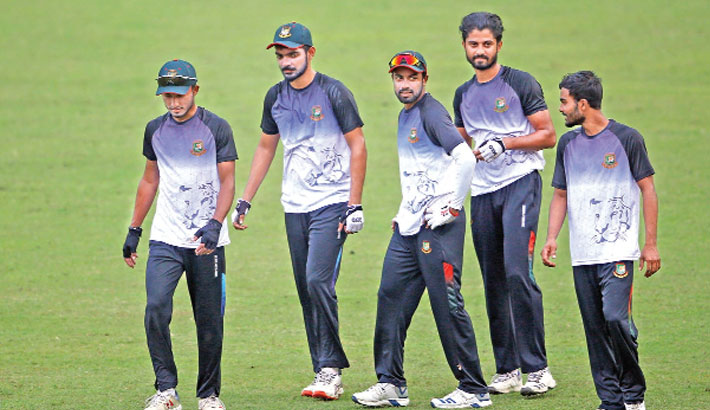 Najmul XI players are seen during a practice session at Sher-e-Bangla National Cricket Stadium in the capital on Tuesday, ahead of their BCB President’s Cup match against Tamim XI today. – SUN PHOTO

Tamim XI need to cross the last hurdle to keep their hope alive of playing BCB President’s Cup final as their back is against the wall ahead of their all-important game against Shanto XI at the Sher-e-Bangla National Cricket Stadium today.

Tamim XI must-win against Shanto XI to stay alive in the tournament as a loss will be enough for them to go out of the competition as they earned only one win in the three games they played.

A win against Tamim XI would ensure Shanto XI in the final against Mahmudullah XI while a loss won’t hurt them much unless they lose by a huge margin as they will be through on the basis of run rate and in that case Tamim XI have a better chance to fight for the championship considering they are ahead of Mahmudullah in run rate.

While Tamim XI opted not to train ahead of the crucial encounter, Shanto XI made sure not to lose their focus and momentum after coming back on track following their loss to Tamim XI by earning a convincing win against Mahmudullah XI in their last match.

Skipper Tamim needs to deliver from the front if they want to have any kind of chance against spirited Shanto XI as the failure of their top orders seems to hurt them the most.

In fact, throughout this tournament top order failed to deliver for all the teams that had an impact on the overall scores of the teams as none of the games had seen a score over 300 runs.

Pace bowlers dominated the show in most games but one man stood high for Shanto XI in the form of Irfan Shukkor as he guided his team to a tremendous win in the opening game to help them start the competition on a perfect note.

Irfan said that he is eyeing to show his character in the tournament adding that Mushfiqur Rahim played a big part behind his transformation through his words.

“I want to do something productive for the team. I am a top-order batsman but now I am batting at seven and my aim is to finish off the games,” he said adding that he is inspired by the batsman Mushfiqur Rahim.

“There are some senior cricketers like Mushfiqur bhai while Soumya is my teammate from the U-19 days. They are representing the country for a long time and I am happy to share the dressing room with them,” he said.

“Mushfiqur bhai asked me to show the character,” he said.