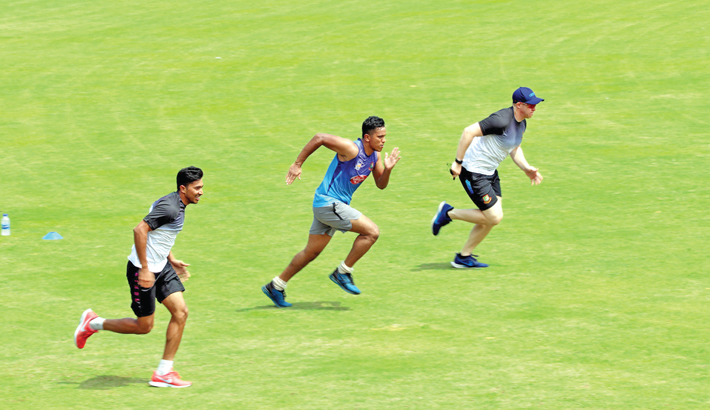 Bangladesh National Cricket Team players will resume training from today at Sher-e-Bangla National Cricket Stadium (SBNCS) as they head for another two-week long residential camp in a bio-bubble environment.

BCB has announced that the senior team will continue to train at their camp in the capital, during which the players will play three long-format practice matches which include two two-day games and one three-day game.

BCB decided that the cricketers and the support staff will continue to stay in a Dhaka hotel for two more weeks to make sure that the bio-bubble safety is not compromised.

Bangladesh's cricketers have been forced to extend their break from international cricket after their tour of Sri Lanka was postponed for a second time on Monday. They were supposed to play a three-match Test series for the first time in six years in October, but now they must wait till January for the home series against West Indies, although that too is uncertain at this stage because of the COVID-19 pandemic. The practice matches are likely to be followed up with a T20 tournament, which will also feature players from the High-performance Unit and others though it is yet to be finalised.

BCB is also hoping that the clubs will agree to the resumption of Dhaka Premier Division Cricket League (DPL) 2019-20, which was postponed after one round of matches in March but whether that can be accomplished only time can say as clubs are not ready to play the league citing financial instability.

After the postponement of Bangladesh’s tour to Sri Lanka for the three-match Test series, BCB chalked out the plan to resume the domestic league.

BCB President Nazmul Hassan Papon said that the board is considering how they can bring back domestic cricket, ensuring a health protocol considering the ongoing COVID-19 pandemic.

He added that the concerned department was advised to set a guideline and a proposal for the league.

“We will start a domestic cricket league and I asked them to start working on the proposal and guideline. It is not a huge issue to start the game but we have asked them to suggest how we can handle the situation and keep the players safe,” Nazmul said recently.

Nazmul said that there were several proposals regarding the domestic cricket’s resumption, amongst which there is proposal for a corporate league or a league which will be held with three teams namely national team, HP Unit and Under-19 team.

“The main point is that we want to involve as many players as possible in the league,” he pointed out.

“There are two parts to domestic cricket,” he said. “One is with 5-6 teams, if there are 6 teams, 90 players can play together. The more players we can get involved, the better. If we can organise a tournament for them, it can be a corporate league or a BCB team or whatever. I am thinking about it. I am thinking again, maybe we could organise a tournament with the national team, HP and under-19 team which will be BCB sponsored. We will choose one from these two proposals. Discussions are going on and it will be a T20 format leagues as far as I understood,” he said.

Papon said the Cricket Committee of Dhaka Metropolis (CCDM) was asked to prepare a guideline as to how DPL can be resumed and which ground can be used to hold the matches of the league but he made it clear that the DPL will be a single league if it is held this season.

“We talked about the suspended league. It could be a single league. But we have to finish the league. And everyone is asked to prepare for next year’s league as soon as possible. If that is not possible then this year’s suspended league will be held. During this time we have to finish the first division, second division and third division and also the DPL,” concluded Papon.