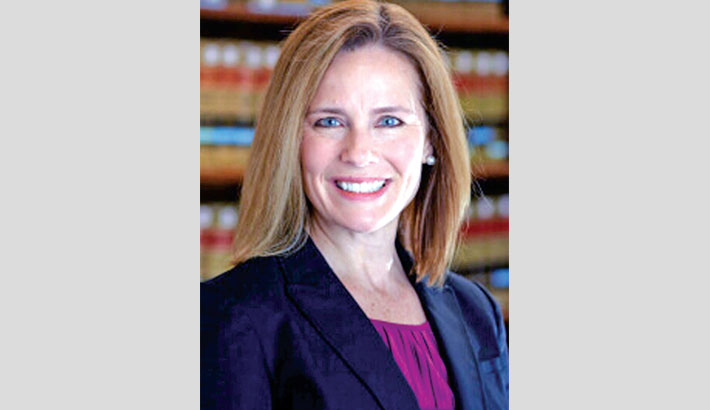 WASHINGTON: President Donald Trump named Amy Coney Barrett to the Supreme Court on Saturday, setting in motion a rush by Republicans to cement a conservative majority on the court on the eve of a tense and potentially disputed US election, reports AFP.

Trump stood alongside Barrett at a White House Rose Garden ceremony to announce his decision, calling her “one of the most brilliant and gifted minds” in the legal world.

Despite strong opposition from Democrats, he predicted a “very quick” and “straightforward” confirmation in the Republican-led Senate, with the process completed before the November 3 election.

If confirmed, Barrett will fill the seat of late liberal justice Ruth Bader Ginsburg, likely steering the court to the right for years, expanding the current conservative wing’s sometimes shaky 5-4 advantage to a solid 6-3.

Trump has previously filled two of the nine seats on the high court.

With the liberals’ influence waning, the court will likely see a replay of some of the biggest judicial disputes in the nation, not least abortion rights and the already battered Obamacare health care plan. More immediately—and even more explosively—a quick confirmation of Barrett would tilt the court just as fears are growing that the body may have to arbitrate a post-election dispute in which either Trump or his Democratic opponent Joe Biden refuses to accept the result.

Trump, who is well behind in the polls, has repeatedly said he may have to challenge results, alleging—without evidence—that Democrats want a “rigged” election. He said this week that the contest is likely to end up in the Supreme Court.

Biden reacted immediately, saying “the Senate should not act” until voters have chosen their next president.

Senate Judiciary Committee hearings to consider Barrett’s nomination are scheduled to begin October 12. Underlining the heavily politicized atmosphere, Trump left soon after the Rose Garden ceremony for a campaign rally in Pennsylvania—one of the handful of swing states that hold the balance in tight presidential elections.

Trump is clearly hoping his ability to transform the Supreme Court to favorable territory for right-wing views will galvanize voters. “Fill the seat!” has become a standard chant at his rallies.