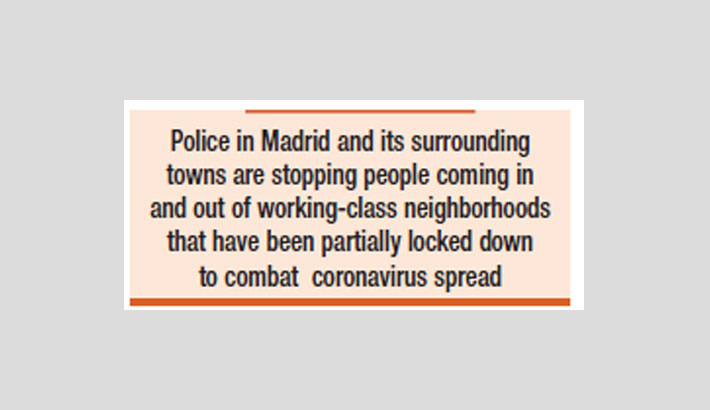 BERLIN: Political pressure grew on Monday in Europe for governments to tackle the rising number of coronavirus case without resorting to a spring-style lockdown that would hit the continent’s struggling economies, reports AP.

Spanish Prime Minister Pedro Sánchez met Monday with the president of the Madrid region, Isabel Díaz Ayuso, to coordinate a stronger response to the outbreaks as the country struggles to contain a second wave of the virus.

Police in the Spanish capital and its surrounding towns are stopping people coming in and out of working-class neighborhoods that have been partially locked down to combat Europe’s fastest coronavirus spread. The measure has been met with protests from people who think the restrictions are stigmatizing the poor.

Some 860,000 residents are affected by the new heightened restrictions, having to justify their trips out of their neighborhoods for work, study or medical reasons. Parks are closed and shops and restaurants have to limit their occupancy to 50% in the affected zones.

The targeted locations have a 14-day rate of transmission above 1,000 cases per 100,000 inhabitants, some of the highest in Europe. COVID-19 has killed at least 30,000 people in Spain since the start of the outbreak, according to the country’s health ministry.

The police controls on Monday are for two days only for informational purposes, but authorities say that enforcement will be mandatory starting from Wednesday and that those not justifying their trips will face fines.

In the Czech Republic, Health Minister Adam Vojtech resigned Monday amid a record rise of coronavirus infections, saying his move should create space for a new approach to the pandemic.

The country coped well with the first wave of the infections in the spring but has been facing a record surge of the new confirmed cases. On Thursday, the Czech Republic recorded more than 3,000 new cases, a figure not seen since March.

The Czech Republic has had a total of 49,290 infected with 503 deaths since the start of the pandemic. Britain’s top medical and scientific advisers delivered a sobering assessment of the COVID-19 pandemic to the public on Monday, amid expectations the government is preparing to announce new measures to control rising infection rates. Chief medical officer Chris Whitty and chief scientific officer Patrick Vallance warned that infection rates are going in the “wrong direction” and the UK faces a challenging winter.

Prime Minister Boris Johnson huddled with ministers over the weekend to discuss the government’s reaction. Analysts expect the government to announce a slate of short-term restrictions that will act as a “circuit breaker” to slow the spread of the disease.

German Chancellor Angela Merkel also met Monday with members of her “coronavirus Cabinet” to discuss measures aimed at preventing a second wave. Health Minister Jens Spahn said he was concerned by the current momentum of the outbreak, particularly in neighboring countries such as France, Austria and the Netherlands.