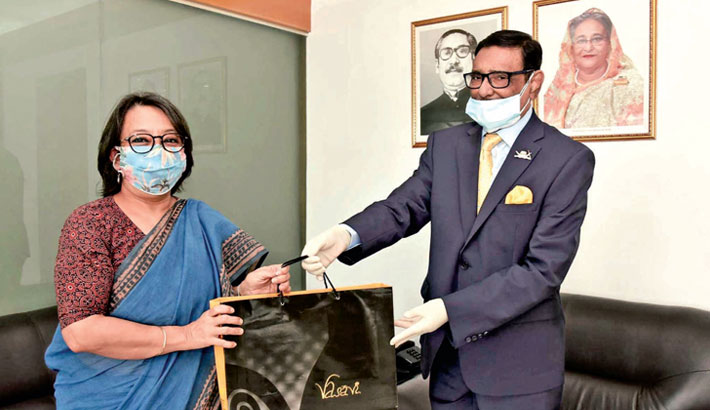 Road Transport and Bridges Minister Obaidul Quader hands over a gift to outgoing Indian High Commissioner Riva Ganguly Das at the Secretariat in the city on Monday. - SUN PHOTO

“Any problem can be solved easily if there are good relations and mutual understanding between neighboring countries. Long-standing problems such as border issues and enclave exchanges could be solved due to having friendly relations between the two countries,” he said.

Quader, also the Awami League general secretary, made the remarks while Indian High Commissioner to Bangladesh Riva Ganguly Das paid a courtesy call on him at his secretariat office in the capital.

Border issues, maritime boundary and exchange of enclaves are the examples of resolving outstanding problems, he said. Thanking the government of India on behalf of Prime Minister Sheikh Hasina for financing infrastructure and road development programmes under an Indian loan scheme, the minister said there has been positive progress in the talks about sharing water of common rivers, including the Teesta.

Quader said that the prime ministers of both the countries are very liberal and futuristic to further develop the relations between the governments and people of the two countries.

During the meeting, the minister also expressed his gratitude to the high commissioner for extending cooperation to the road transport and bridges ministry in taking ahead the projects for the road infrastructural development of the country under Indian loan scheme.

The outgoing high commissioner also thanked Obaidul Quader for his cooperation with the projects to develop communication infrastructure in the country.

On March 2, visiting Indian Foreign Secretary Harsh Vardhan Shringla said Bangladesh and India are working to finalise an agreement on water sharing of seven common rivers within this year.

“We agreed to expedite harmonisation of this data so that water-sharing agreement can be finalised as early as possible, possibly within this year,” Shringla said highlighting the water flow of seven trans-boundary rivers.