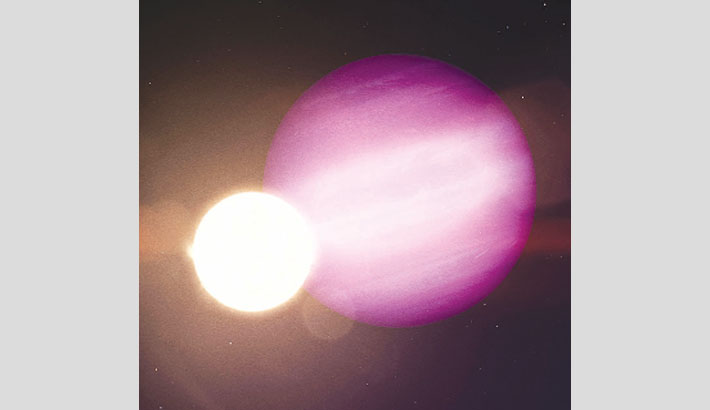 Astronomers have discovered a planet the size of Jupiter closely orbiting the smouldering remains of a dead star, the first time that an intact exoplanet has been discovered travelling around a white dwarf, according to research published on Wednesday, reports AFP.

Researchers said the fate of this giant planet, called WD 1586 b, offers a potential vision of our own Solar System when the Sun eventually ages into a white dwarf in around five billion years. When it has burned through its stores of hydrogen, a star like the Sun enters its death-throes, first swelling enormously into an incandescent red giant that scorches and engulfs nearby planets.

Then it collapses, reducing it to its burnt-out core. This is the white dwarf, an extremely dense stellar ember glowing faintly with leftover thermal energy and slowly fading over billions of years.

Previous research has suggested some white dwarfs can retain more distant remnants of their planetary systems.

But until now no intact planets had been detected in orbit around one of the dead stars.

“The discovery came as something of a surprise,” said Andrew Vanderburg, assistant professor at the University of Wisconsin-Madison, who led the research published in Nature.

“A previous example of a similar system, where an object was seen to pass in front of a white dwarf, showed only a debris field from a disintegrating asteroid.”

The planet is around ten times bigger than its shrunken parent star, known as WD 1856+534.