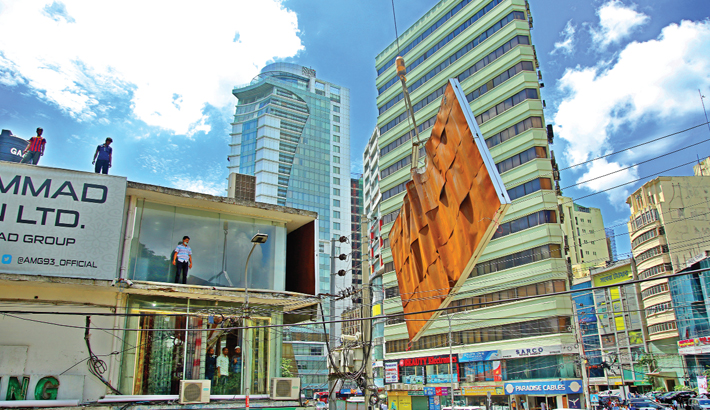 Dhaka North City Corporation (DNCC) on Tuesday started a drive against illegal signboards and billboards on the city’s roads and footpath.

On the first day of the drives, DNCC executive magistrate Abdul Hamid Mia conducted a drive in Gulshan-2 area and removed around 150 illegal signboards and billboards.

100 illegal billboards and signboards. He also fined a number of institutions Tk70,000 for illegally occupying roads and footpaths creating a bar to public movement.

Magistrate Sajia Safrin conducted another drive at Pragati Sarani and removed 52 illegal signboards. She auctioned goods kept on road and footpaths which were sold for Tk66,700.

DNCC Mayor Atiqul Islam joined the crackdown in Gulshan-2. He urged the city residents to pay tax first and follow rules before putting up billboards in the city.

He said, “You will put up signboards and billboards for the branding of your trade and you will not pay tax. This is unlikely. This cannot go for the long run. Pay tax first and follow rules of DNCC before putting up signboards.”

He made the remark during a drive to remove illegal billboards at Gulshan-2 area in the capital.

The mayor also said that before putting up any signboards permission from City Corporation is a must for any citizen under DNCC and they have to follow guidelines set by the authorities.  “Those who pay tax will be treated with sweet but those will put up signboards without permission and tax will be fined. Those who are conducting business are not philanthropists. They have to pay tax for the beautification of the city,” DNCC mayor Atique also said. During the drive mayor Atiqul Islam fed two persons sweet for putting up signboards with the permission and following the rules of DNCC.

He said that all illegal billboards will be removed from city during the drive and the drive to evict illegal establishments from road and footpaths also continue.