I’m not an angel: Salahuddin 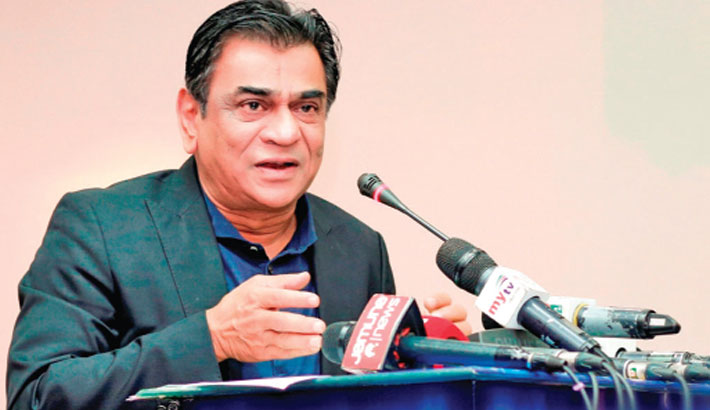 The three-time Bangladesh Football Federation (BFF) president Kazi Salahuddin is going to take part in the upcoming BFF Elective Congress’2020 on October 3 expecting to retain his post for the fourth consecutive time. Expectedly, the long-serving BFF boss and arguably the country's greatest striker brought a bag of promises and dreams with him.

In an exclusive interview with The Daily Sun, the former national captain gave explanations of his doings over the past 12 years and shared the next plan of action.

The Daily Sun: You have been holding the position of BFF president over the past 12 years. Now you are expecting to be elected for the fourth consecutive time. How do you evaluate the 12 years of your regime?

Kazi Salahuddin: If you go back before 2008, you will get the real picture. Bangladesh football absolutely was dead at that time. There were no leagues, players were doing nothing. When I got into here in 2008, most of the people asked me why I had come to a dead place. I said somebody has to make it alive. Since then, I have completed 12 leagues, 12 federation cups, 12 independence cups and other domestic competitions. Now, you can see the result. Players know that they will be paid per year. We’ve made players and the current national team are its outcome. If you make an analysis of the last 40 years, you will find the performances of the current national team are much higher than the previous teams. The team beat strong team Qatar to move to the second round in Asian Games and played in a 1-1 draw with India in World Cup qualifiers at their home in front of 70,000 football fans.

Some people say that we are killing football but it’s not true. It’s not the actual picture. Let’s talk about our district football. If you go back before my 12-year, you will get a different picture. Nobody has provided support to district football. I’m the first person who financially supported district football on my own accord. Almost fifty districts are organising leagues now. This year, I’ve provided around Tk 7 lakh to them. No one helps me for this purpose, neither the government nor FIFA. These are my personal efforts.

DS: Is there any place where you feel you have failed?

Salahuddin: I have been trying for a long time to bring clubs into professionalism but failing to do so. There are some things which are not depending on me such as their financial structure, lack of fields. We need to find a solution to overcome these obstacles. I’ve done what I’m able to do. Now, they have to come forward.

Professionalism can’t be taught to anyone, they have to practice it themselves. The clubs come first to me; I have always been giving priority to the clubs. Because I believe if our clubs practice professionalism then our football scenario will be changed.

DS: Do you think the people around you never support you rather they are busy to find out your mistakes?

Salahuddin: Unfortunately, it’s true. Our two vice-presidents -- Mohi and Badal -- are politicians. They thought they could make us insignificant by their politics. In the last AGM, our 137 councillors, except them, approved the financial reports. FIFA, AFC audited these reports. Both of them are also members of the finance committee. I told them it’s not my department, both you are the part of it. If you find anything wrong then inform me in this regard. Both of them sent me the same letter. They intentionally did it.

DS: People say our football is lagging behind. What do you say about it?

Salahuddin: This is a complete lie, this is false a propaganda. Please tell them to check the statistics. Of Course; there are ups and downs. There was no football when I got into here. We used to play with clubs during my time but now the national team are playing with solid teams.  Now, we didn’t concede 10 goals. Some five to seven players, who are saying these in the talk shows, retired from football at least 20-22 years ago. There are no visual activities of them, they just want publicity. They are spreading false information and giving fake explanations for publicity. But my time is precious; I don’t have enough time to waste. I see my players are able to buy new cars, these are my enjoyment. Unfortunately, the current players do not get chances in talk shows. If they get the chance, they will reveal the truth.

DS: Your opponents claimed that you didn’t utilise the money properly. What will you say about it?

Salahuddin: It’s another false statement. I can show my accounts. I’m not an angel, I can also make mistakes. But that doesn’t mean you can alter my truth.

DS: Your opponents also raised questions about your football diplomacy.

Salahuddin: I’m a 100 percent diplomat. If I am not a diplomat, then how could I’m elected as SAFF president for three consecutive times? How could Mahfuza Akter Kiron become a FIFA board member? If you look at FIFA, AFC calendar, we will see that no one arranges invitational tournaments nowadays. Most of the nations remain busy with their own schedules -- domestic leagues, AFC competitions, World Cup qualifiers. But, Bangladesh are among the few nations that arrange invitational tournaments. That is why; I get respect from both FIFA and AFC.

DS: This year, two candidates -- Badal Roy and Shafiqul Islam Manik -- are standing against you. They are talking about the change. Do you think change is needed anywhere?

Salahuddin: I don’t know what they mean with the word ‘Change’. Badal Roy is a politician, so he used political words. He wants changes but also requested not to arrange polls. It is a political game.

DS: Our women’s football is emerging under your leadership. Also, you successfully set up an academy. Do you have any special plans for these sectors?

Salahuddin: First of all, this is not only my credit. We’re a team and we are making it. Of course, I’ve some big plan for women’s football. The financial obstacle is my big challenge. Also, we have lagged behind due to COVID-19. I’ll definitely give it a priority. Besides, our Prime Minister also likes it too much.

I have plans to increase the number of academies. I have some members in my panel who are able to run academies nicely. If I am elected this time, I will distribute some responsibilities among them. It’s my plan.

DS: You have brought a bag of promises and dreams with you. What will you do, if elected again?

Salahuddin: I’ve made a pause; I’ll continue from there if I am elected. I’ll fill those gaps which were created due to COVID-19. National teams, leagues, clubs, academies and grassroots football are my projects. I have still to do a lot of things in these fields. I’ve made bases in these fields over the past 12 years, now I will develop these but I can’t do it alone, I need all of your support in the regard. Also, I want support from our football community, media and the people around me.

The financial crisis is a big challenge for me. If you see the big Asian countries like Japan, South Korea invests millions of dollars in football development. Their governments and corporate sectors also provide the money in this arena. No one gives us 5 to 10 percent of it. We need that amount of money to be like them.

The publicity is another big issue here. In this case, the media have to play a vital role. People will turn away from football if you write or broadcast only the failures avoiding the successes. We will request the councillors to vote for the capable candidates if you want to see the actual development of our football arena.