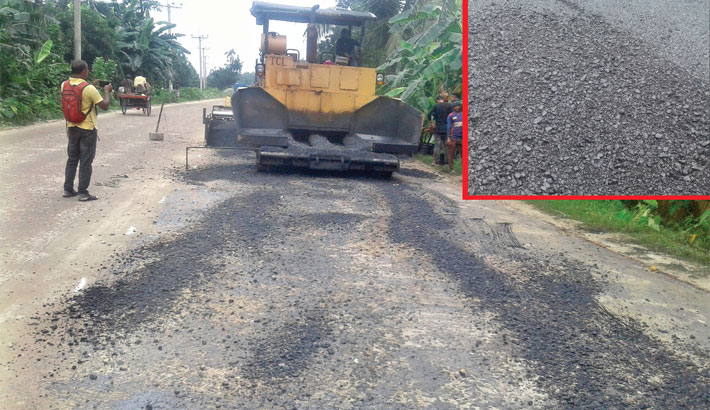 The repair work of the badly damaged 19-kilometre stretch of Netrakona-Mymensingh highway has remained suspended for around two months hampering traffic on the road. The authorities concerned halted the work following allegation that low-quality bitumen was used for the road repair. (Inset) Concrete chips have surfaced on the road due to use of low-quality bitumen. The photo was taken on Wednesday. – SUN PHOTO

The repairing work of the 19-kilometre Mymensingh-Netrokona highway has stopped due to the use of low-quality bitumen, causing an unexpected delay in the project and disrupting traffic movement.

It has been alleged that the repairing work of the highway remains halted for the last two months for using sub-standard bitumen.

They also drew the attention of Road Transport and Bridges Minister Obaidul Quader to look into the matter.

However, Roads and Highways Executive Engineer M Hamidul Islam ruled out the allegation of low-quality bitumen use.

Sources said that Tanvir Construction was awarded the repairing work of seal carpeting worth Tk 1.08 billion in 2018. But after getting the work order, the company has been dillydallying with the work.

The company has been using low-grade imported bitumen instead of the bitumen of Petrobangla, sources said, adding that the overall thickness of the seal coat was supposed to be 60mm but the work has been underway with only 45-50mm seal coating.

Besides, allegations have been raised against the company for using the mixture of stones and sand.

Netrokona Roads and Highway Department Sub-assistant Engineer Md Al Amin claimed that bitumen is being used in the overall project and work is going on at full pace.

Sub-assistant engineer Md Maidul Islam, who supervises the project, also refuted the allegation of low-standard bitumen use in the project.

“This is not low-quality bitumen,” he argued.

Sakhawat Hossain, Local Project Manger of Tanvir Construction, Netrokona, claimed that they were using high-end technology and machinery in the project along with quality stone and bitumen.

While asked about the use of low-quality bitumen in the repair work, Executive Engineer of Netrokona Roads and Highway Department Md Hamidul Islam said officials of his department are regularly monitoring the progress of the work.

“Repair work has been remained suspended due to scarcity of stone and there is no chance of irregularities in the project,” he claimed.