Bangabandhu at C’Wealth Meet in Ottawa

On trade, tariff and monetary issues 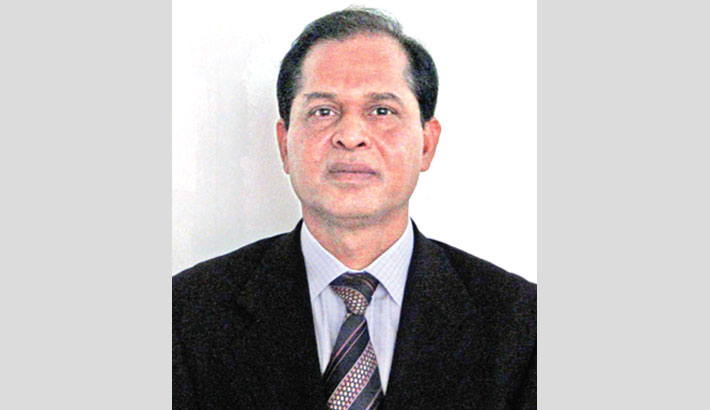 At the meeting of the Commonwealth Heads of Government on Trade, Tariff and Monetary matters, Bangabandhu Sheikh Mujibur Rahman placed his statement on 7 August 1973 (on the second day). In his statement, he highlighted the problems of disparity between the rich and poor countries, the instability in international currency situation, the difficulties related to foreign investment and trading position in developing countries, and the adverse consequences of the entry of UK in the EEC.

Bangabandhu said, “We are meeting at a time when the Committee of Twenty of the International Monetary Fund has reached an advanced stage in negotiations regarding the future of the international monetary order, when multilateral trade negotiations under the auspices of GATT are under way, and the EEC is engaged in negotiations with the developing countries regarding preferential access of their exports into the Common Market.” Defining the situation ‘an appropriate moment’ for the Commonwealth to make a positive contribution to the solution of those problems and the creation of a healthier international economic environment, he urged to adopt an enlightened common approach.

Bangabandhu informed the meeting that some of the developed countries of the Commonwealth had showed a keen awareness of the problems of the growing disparity between the rich and poor countries and of the need for action to reverse that trend. Stating the part played by Prime Minister Trudeau at their parliament on that issue, Bangabandhu expressed the hope that under his Chairmanship, the meeting would be able to define an approach, a Commonwealth approach, to a solution of the urgent international economic problems as the meeting had been discussing from the day before.

On immediate consequence of Britain’s entry into the EEC, Bangabandhu said that it would be the loss of preferential access to her market for the exports of the rest of the Commonwealth countries. He suggested maintaining the preferential arrangements until negotiations with EEC were completed by the respective Commonwealth countries; otherwise many countries including Bangladesh would suffer sudden setbacks in their exports with serious adverse effect on their economies. He also emphasised on obtaining the best terms in negotiations and securing liberalisation of the generalised scheme of preferences to be extended by EEC. Bangabandhu called upon the meeting to affirm that those expectations reflected the views of the entire Commonwealth. He hoped that this would not only strengthen Britain’s hand, but would underline that a solemn responsibility was being cast by the association on its senior most member who would not disappoint the Commonwealth to assume that responsibility.

He urged that as one of the least developed countries, Bangladesh should secure special concessions through negotiations with EEC, both in respect of concessions granted to Commonwealth countries as well as the liberalisation of the GSP. Bangabandhu mentioned that Bangladesh had suffered a significant setback in its external trade relations due to disruption in trading links that existed prior to its liberation as well as finding new sources of exports and imports. He also said that disruption of the internal production and distribution system, including transportation and communication facilities, had delayed the recovery of its export-import flows. He said, “While on our part we have been sparing no effort to reconstruct our war-ravaged economy, the sudden loss of preferential access to the UK market would seriously aggravate our present economic difficulties, as this would involve a further dislocation in our trading relations. In view of these special circumstances, it is hoped that it will be appreciated that Bangladesh needs time to adjust both the composition and the geographical distribution of her external trade.”

That time, the economies of many developing Commonwealth members depended heavily on one or two raw material exports, which were facing increasing competition from synthetics in developed countries. Citing the example of jute of Bangladesh, Bangabandhu said, “If the export earnings of such countries have to be expanded, with a view to promoting self-reliance, it is necessary that the rich countries help them to meet effectively the threat of substitutes. This calls for research, for development of new uses of raw material, and for increased productivity and technological innovation.” Instead of rich countries spending vast sums on the development of synthetic substitutes, Bangabandhu expected from them, particularly those in the Commonwealth to refrain from shifting to substitutes, and instead, to contribute towards efforts to improve the quality and reduce the cost of the raw materials concerned and to participate in market research aimed at developing new uses of such material in the developed countries. He informed the meeting that Bangladesh, along with India and other jute producing countries, had already taken initiatives to establish an International Centre for Jute with a view to promoting technological research and development of new uses of jute manufactures. He also welcomed the developed Commonwealth countries in that regard.

Since the cost of imports from developed countries was increasing, the poor countries had to expand earnings from their traditional exports. In that context, Bangabandhu said, “This requires preferential access of semi-processed and processed primary products and labour intensive manufactures to the markets of the developed countries. In addition, it requires adoption by the developed countries of various domestic measures, including reduction of non-tariff barriers such as internal levies and taxes specifications and standards, which restrict the demand for such products in their domestic markets.”

Bangabandhu appreciated that the rich countries were themselves faced with the problems of depressed areas and declining industries which faced competition from the newer manufactures from the developing world. He said, “But then it cannot be denied that the rich countries have much greater flexibility in their economic structure and much larger resources at their disposal so that they are in a position to make the necessary structural adjustments in their economy-adjustments which must be made if developing countries are to be enabled to avail of their comparative advantage in trade.” 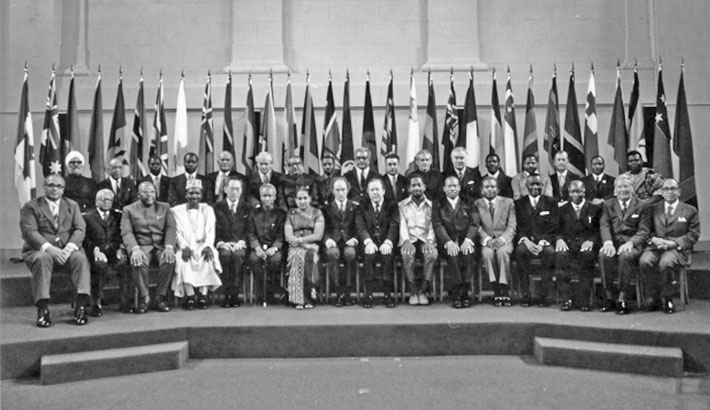 Welcoming the progress made in recent weeks in negotiations in the Committee of Twenty towards the establishment of a more international monetary order, Bangabandhu said, “It will, however, be a pity if, while seeking to resolve the international monetary problems of the developed countries, the pressing needs of the developing countries for increased liquidity and for additional resources for development are overlooked. We do not think that there is any reason to ‘go slow’ on forging the link between SDR’s and development assistance. We do not see why this should jeopardise progress towards creation of additional monetary reserves for the developed world.”  Bangabandhu said that the meeting should urge rich Commonwealth countries to take an active and a leading role in supporting the case for the ‘link’. Considering the relative stagnation in the flow of development assistance, he urged for international monetary reform for promoting that ‘link’. He pointed out that it was the most opportune moment for providing necessary push in the direction of enlarging the flow of resources to poor countries.

Bangabandhu expressed his disappointment for not meeting the target for development assistance set by UNCTAD and OECD Development Assistance Committee at 0.7 per cent of GDP of the rich countries. He hoped that the rich Commonwealth countries would realise the target as quickly as possible. He emphasised its necessity in view of the rising prices of the imports of the developing world which had the effect of eroding the real value of assistance. He said that to combine private investment with official development assistance as a measure of a rich country’s efforts to develop the poor was unjustified and failed to take into account the nature and the terms of assistance which developing countries required to overcome their poverty.

Referring to previous day’s discussions on the measures which certain rich countries had adopted in their domestic economies in order to spread more evenly economic opportunities among different regions of their countries, Bangabandhu said, “The same principle of ‘equal opportunity’ must be extended to the developing countries in the context of the international economy. What is needed to achieve this is political will; what is needed is recognition by the rich countries of their responsibility towards the poorer countries. We recognise that disparities between the poor and the rich countries cannot be eliminated over night, or indeed for a long time to come, but what is imperative is that the international community should recognise the responsibility of ensuring a critical minimum rate of growth of between 6 to 7 per cent per annum in the poor countries. The accomplishment of this objective does not require a substantial transfer of resources from the rich to the poor countries. One might argue about the pros and cons of various methods of accomplishing such an objective, but none can argue against the objective itself.”

Bangabandhu ended his statement with the expectation that a determination by the members of the Commonwealth to adopt a common approach to solve the urgent international problems which the participants had been discussing could make a significant contribution to their solution. He said, “Let the Ottawa meeting bring forth from them a bold positive response to the challenge.”

In an interview with a correspondent of the ‘Toronto Star’ on 8 August, Bangabandhu called upon all countries to put pressure on Pakistan to release the innocent Bangalees detained in Pakistan. He said Bangladesh sought friendly relations with all countries. In this context, he mentioned the Joint Declaration signed by India and Bangladesh to solve the humanitarian problems of the sub-continent.

Replying to a question, Bangabandhu said that the best solution to humanitarian problems was laid in that Joint Declaration. He said, "We believe in humanitarian justice." Bangabandhu said that the Declaration proposed the repatriation of the Bangalees detained in Pakistan, Pakistanis in Bangladesh and all POWs except 195. He also informed that 195 POWs would be tried for genocide in Bangladesh. In reply to another question, Bangabandhu said that these war criminals must be tried in order to uphold the flag of justice. He added that they would have the right to appoint international lawyers to defend themselves - but no Pakistani lawyers would be allowed. Bangabandhu said, "I believe in humanitarian considerations, values and democratic norms. Based on this, I have organised the people for the liberation struggle.” He also mentioned the problems caused by Pakistani occupation army in Bangladesh and the problems arising out of 25 years of colonial rule as well as the achievements of his government.