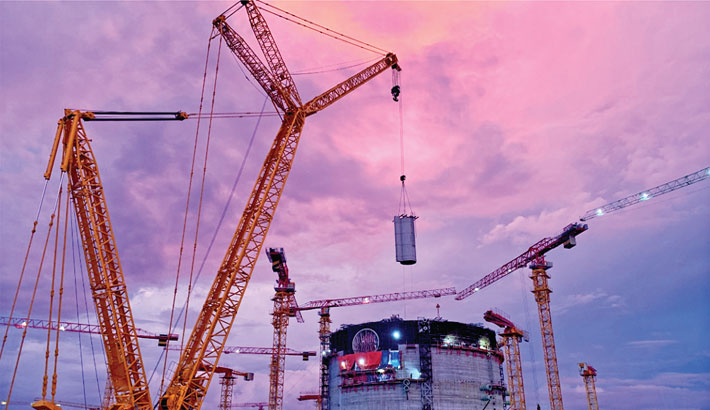 Third layer of the inner containment of reactor building at Unit-1 of Rooppur Nuclear Power Project has been erected recently.

Now the 34.4 meters of the inner containment is visible on the ground.

It is one of the construction milestones at the Rooppur NPP site for 2020, and was completed as per schedule, said an official release.

New technical solutions were applied during the job that allowed increased labor productivity.  Erection works were performed by a Russian company- TrestRosSEM in 118 days and 2,000 cubic meters of concrete mixture was used for the purpose.

On top of the third layer, another 4-meter layer of the containment will be constructed, that will support the polar crane. Finally, the dome will be placed on top of it.

The polar crane is intended for installation of the main equipment of the reactor building like reactor pressure vessel, steam generators, main circulation pumps, as well as pipelines and other metal structures.

Rooppur nuclear power plant is being constructed according to Russian design. The plant will have two power units, each of 1200MW capacity. Latest 3+ Generation VVER- 1200 Russian reactor will be installed in each of the unit. General contractor of Rooppur NPP construction is Atomstroyexport, Engineering Division of Russian State Atomic Energy Commission – Rosatom.