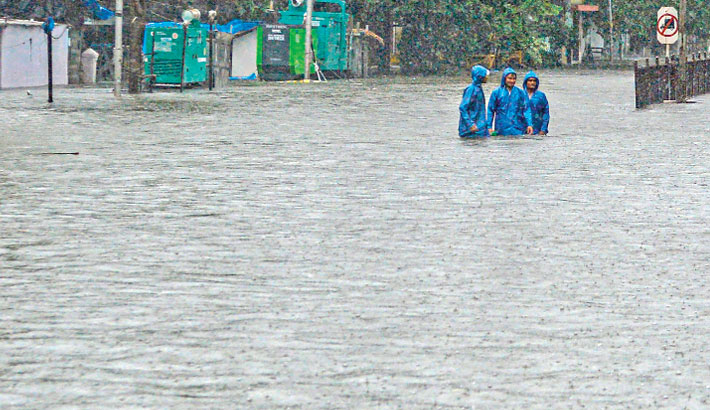 Commuters wade through a flooded road during a heavy monsoon rain in Mumbai on Tuesday. – AFP PHOTO

Several areas in the city and suburbs received more than 200 mm rainfall since Monday night and heavy showers were likely to continue for next 48 hours, according to the India Meteorological Department (IMD). Local train services, which are currently being operated only for those engaged in essential services, were suspended on some routes in Mumbai and suburbs in the morning due to water-logging on rail tracks.

Some roads near Byculla, Dadar and Mahalaxmi were inundated and traffic police had to divert traffic from those areas.

Water was seen gushing on a road in suburban Kandivali in the morning as rains pounded the city. Several houses in low-lying areas like Kurla, Sion and parts of Bhandup were flooded due to the heavy downpour, a civic official said.

A landslide on the Western Express Highway, a major north-south arterial road, in suburban Kandivali affected vehicular movement from the western suburbs towards south Mumbai, though there was no casualty, officials said. Water-logging outside the civic-run Nair Hospital in central Mumbai, where several COVID-19 patients from the city are being treated, posed a problem for its medical staff.

“Nurses and other medical staff have been struggling to reach the hospital due to water-logging in the premises and elsewhere, a resident doctor from the hospital said.

Suburban train services on the harbour line were stopped in the morning due to water-logging on rail tracks while services on the western and central lines were also affected, a civic official said.

“No suburban trains are held up in between stations.

Dn mail/express trains are being rescheduled,” he added.

On the western line, the water level on tracks between Dadar and Prabhadevi reached 200 mm, a Western Railway official said.

All lines were affected in this section. Train movement was stopped at Dadar, but suburban services were running between Bandra and Dahanu Road, he said.

After the heavy showers, water entered the Matunga police station and the road outside it was also inundated.

Several vehicles, which suffered engine problems due to the heavy downpour, were seen lying abandoned on roads.

Some incidents of tree fall were also reported, a civic official said, adding that a big tree fell on Andheri- SEEPZ road, disrupting traffic movement there.

The Brihanmumbai Municipal Corporation (BMC) appealed to residents to stay at home and urged commercial establishments, except those providing essential services, to remain closed on Tuesday.

The Bombay High Court adjourned its virtual hearings in various cases as many staff members could not reach the court in south Mumbai, an official said.

The high court will hear the matters on Wednesday, an official said.

The Maharashtra government also announced a holiday for all its offices in Mumbai city and suburbs on Tuesday in view of the heavy rainfall in the metropolis and neighbouring areas.