In Search of a Real-time Flood Forecasting System

Bangladesh is facing another severe flood this year. Right now, the water level of 20 points of 16 rivers of the north, central and east region of Bangladesh is crossing the flood danger level. The flood situation will be worsened in the upcoming days for the Brahmaputra-Teesta River basins. Heavy rainfall of Assam, Tripura, Meghalaya, foothills of Himalaya in West Bengal of India, Nepal, Bhutan, and China is the main reason behind the flood of this year. If we study the historical flood statistics, reports, and observed data of Bahadurabad Station of the Brahmaputra River since 1984, it is found that the previous highest floodlevel was recorded in the year of 1988, which was 20.62 mPWD. In 2016, the water level at Bahadurabad reached 20.71 mPWD breaking the record of 1988. In 2017, the water level rose to 20.84 mPWD breaking the record of 2016 and finally, in 2019 the water level reached 21.16 mPWD breaking all the previous records of all time. So, in the last five years, there were four big floods in 2016, 2017, 2019, and 2020. 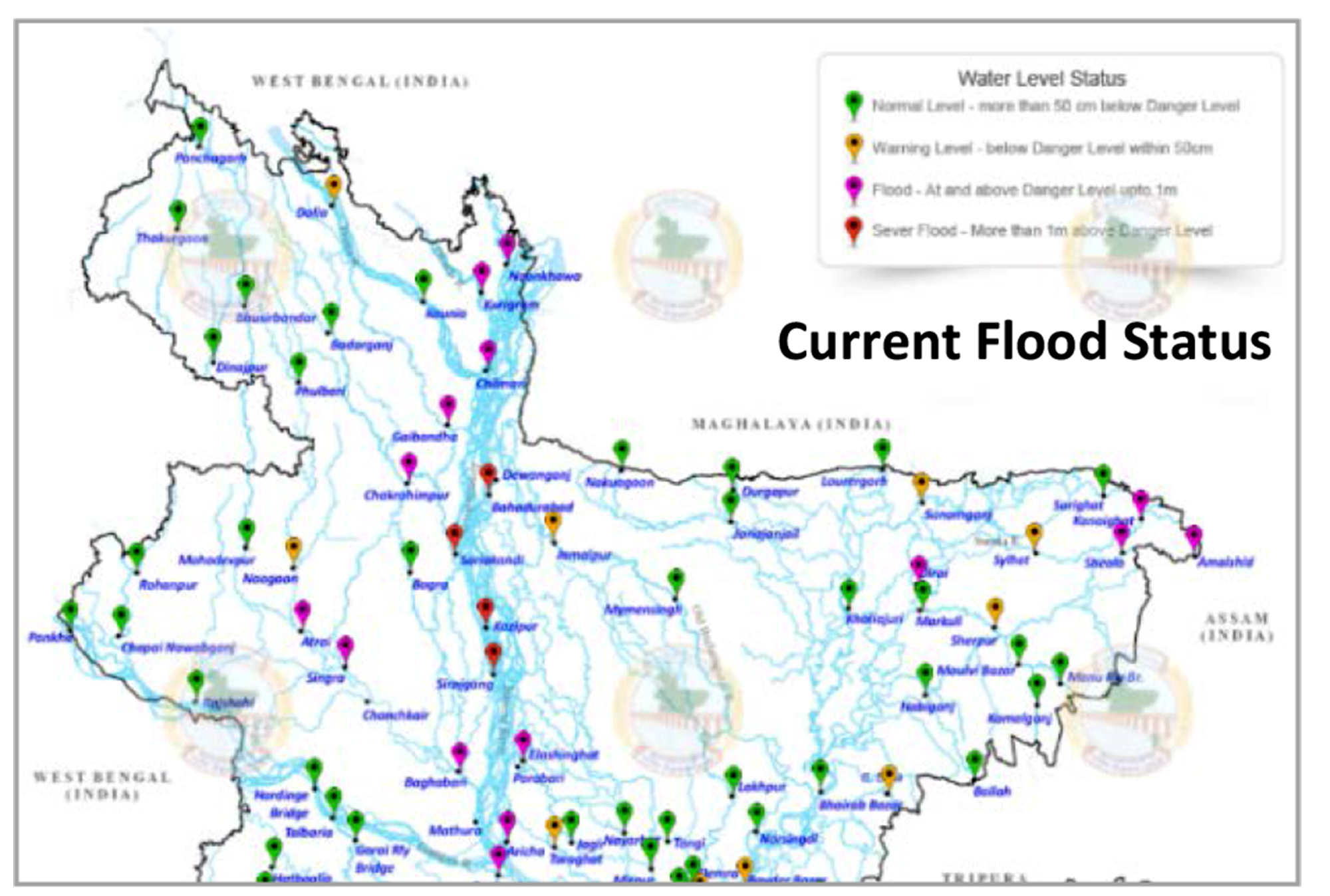 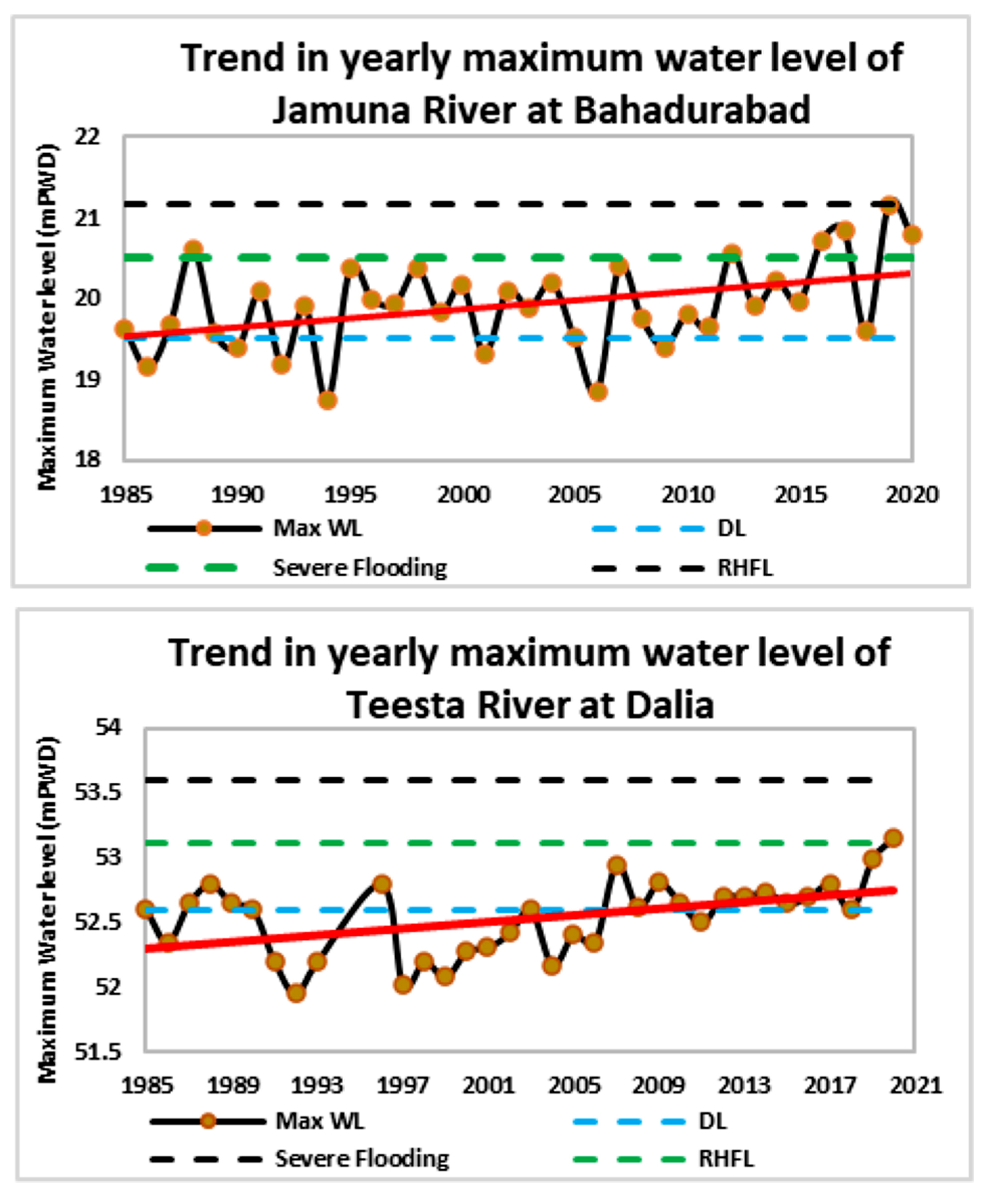 The Teesta River also exceeds its previous flood level this year flowing about 53 cm above its pre-determined danger level, setting a new record.

If the duration of flood is considered, then the flood of 1998 was the longest flood of Bangladesh. This year an early spell of flood started on 26thof June and lasted for 10 days. After a 4/5 days respite, flooding again started on the 11th of July.According to the weather forecasting of Global Forecast System (GFS), European Centre for Medium-Range Weather Forecasts (ECMWF), Indian Meteorological Department (IMD), and Bangladesh Meteorological Department (BMD), there will be heavy rainfall in the next couple of days in Assam, Meghalaya, Bihar, Himachal Pradesh and adjoining areas of West Bengal. So, altogether these two spells would stretch the flood situation for total three weeks this year which indicates another long-lasting flood in Bangladesh after 1998. Besides, while monsoon floods normally occur in July, August, and September in Bangladesh, this year the monsoon flood starts in the last week of June indicating its early onset compared to the usual time frame. Overall, floods are getting

more extreme and frequent. At the same time, they are arriving early with prolonged duration. So, the severity of floods and their anticipated losses and damages are growing as well. No doubt that these are the consequences of global warming and climate change that are prevailing all over the world and going to worsen manifolds in the future. Recent IPCC climate reports, journals, and publications clearly indicate a significant increase of monsoon flows in GBM (Ganges-Brahmaputra-Meghna) basins by the end of the 21st century. This excessive flow will ultimately discharge into the Bay of Bengal through Bangladesh. So, it’s certain that Bangladesh will face more intense, frequent, and prolonged floods in the near future. Hence, a long term, sustainable, and climate-resilient flood management plan is a necessity of the day.

Globally, at present flood management measures are focused on both Mitigation and Adaptation. In harmony with these, both Structural and Non-structural measures should be considered in the future flood management plan of Bangladesh. Real-time Flood Forecasting and Warning is the most popular non-structural measure considered in the present world. The flood forecasting provides forecasted time-profiles of river flows or water levels for periods ranging from a few hours to days ahead and flood warning makes use of these forecasts to tell decisions on warnings of floods. Real-time flood forecasting at the regional areas can be done by high-resolution numerical modeling, statistical data analysis, artificial neural network etc. Effective real-time flood forecasting is highly useful for early warning and disaster prevention.

Institute of Water and Flood Management (IWFM) of BUET has already assisted Flood Forecasting & Warning Centre (FFWC) of Bangladesh Water development Board (BWDB) in development of flash flood warning and forecasting system of the northeast Haor region through a research project entitled FFEWS (Flash Flood Early Warning System) funded by LGED and IFAD. Right now, we are working on forecasting monsoon flood of the Brahmaputra - Teesta Basins through another project entitled Pravati3 (Promoting Resilience of vulnerable through access to Infrastructure, Improved Skills and Information) lead by Professor Dr. AKM Saiful Islam and funded by LGED and IFAD. The project target is to develop a Hydro-Meteorological multi modeling system of the five northwestern districts of Bangladesh covering highly flood-prone Lalmonirhat, Nilphamari, Rangpur, Kurigram, Gaibandha, and Jamalpur district. A 3-staged multi modeling framework is being used in this project. The whole system is developed using a high-resolution and open-source modeling system which makes it economic, easily accessible, and operational for both high-tech and medium-tech personals.At first, a numerical Weather Prediction System (Weather Research and Forecasting Model) is used incorporating the terrestrial and gridded information, cloud physics available from various world weather forecasting centers like GPS, ECMWF etc. Later, the rainfall and temperature output of the Weather model is used as the boundary input of a Hydrologic model (rainfall-runoff model). Finally, the discharge output obtained from the Hydrologic model is delivered as the input of the Hydrodynamic model (streamflow routing model). The final output of the Hydrodynamic model - the water level is later compared with the existing danger level determined by BWDB and forecasted by FFWC followed by proper judgment between forecasted outputs of different Institutes. Later, field level dissemination of these flood forecasting is conducted by local BWDB, LGED, DRRO in the DC offices, NGOs etc. There are many challenges yet to be solved in hydro-meteorological forecasting and warning dissemination to the community. However, the hydro-meteorological modeling skills of IWFM, BUET followed by proper forecasting and warning disseminationby the local-level administrative offices can lessen flood loss and damage to a large extent. We are expecting to develop a full-fledged monsoon flood forecasting and warning tool before the starting of the next monsoon.

Binata Roy is an Assistant Professor and Dr. AKM Saiful Islam is a Professor at the Institute of Water and Flood Management (IWFM), Bangladesh University of Engineering & Technology (BUET)