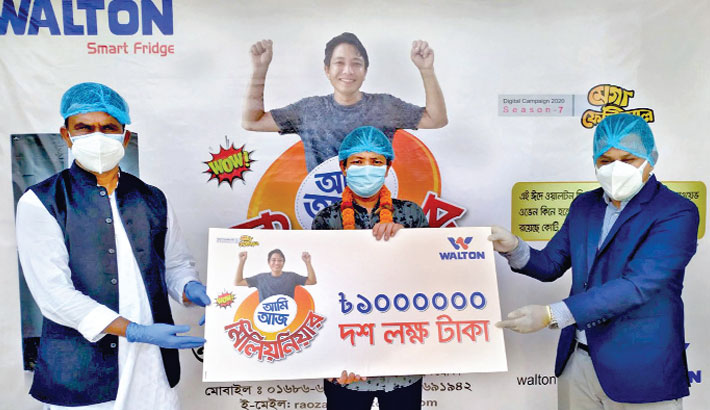 A Walton official hands over a cheque for Rk 10 lakh to Chaithwai Aoung Marma at Walton Plaza in Raozan of Chattogram.

Chaithwai Aoung Marma, a poultry farmer from Kawkhali Upazila of Rangamati, has become millionaire after he purchased a Walton refrigerator. Walton is providing the facilities to its customers under the ongoing ‘Digital Campaign Season-7.’ The Marma youth now intends to invest this money in expansion of his business.

Walton is conducting the ‘Digital Campaign’ across the country to accelerate the initiative of building customer database for delivering online based swift and best after sales service. Under Season-7, a customers is likely to get Tk.1 million (10 lakh) through purchasing any model of fridge, washing machine or microwave oven from Walton plaza, distributor outlet and E-Plaza across the country. Besides, customers will get sure cash vouchers worth of maximum Tk 1 lakh. Customers will enjoy the benefits until Eid-ul-Azha.

Earlier, Wazed Ali, a tailor from Gazipur and Solaiman Haque, a towel vendor from Naogaon, have also become millionaires after purchasing Walton refrigerators.

Chaithwai Aoung Marma, hailed from Betbunia Suger Mill village, purchased a refrigerator worth of Tk.32,500 from the Raozan Plaza. He received a SMS in his mobile phone from Walton with the notification of getting Tk 10 lakh cash on registration of the fridge. Aoung, with his wife and two minor daughters, is living with earnings from his poultry farming.

Thanking Walton for providing such facilities for the customers, he said, ‘I’ve learnt about Walton's digital campaign through newspapers and television. Almost all of my friends and relatives have bought Walton refrigerators. I have heard from them that Walton refrigerators are high in quality but affordable in prices.