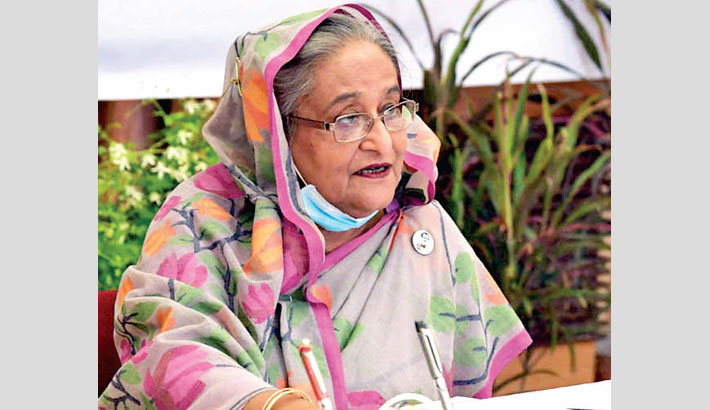 Prime Minister Sheikh Haisna on Sunday ruled out reopening of the educational institutions right now, saying her government does not want to put the students at the risk of being infected with coronavirus.

“Students are the future of the nation. We don’t want to put them at risk by opening the educational institutions. We want to advance step by step so that the students are not infected with coronavirus,” she said.

The premier came up with the remark while publishing the results of SSC and equivalent exams from her official residence Ganobhaban through videoconferencing with Education Minister Dr Dipu Moni who was present at her ministry with chairmen of different education boards.

Dipu Moni, on behalf of the Prime Minister, received the results from the chairmen of the education boards.

Sheikh Hasina said students are the future of the country and the government does not want to put them at risk of getting infected with the virus.

Terming the present situation a crisis for the whole world, the premier asked all to have self-confidence. “Self-confidence is the biggest thing. We have to face whatever situation comes.”

The premier said the country have already faced a cyclone and high tide amid the coronavirus pandemic.

“We will face all crises, including cyclone, with confidence and we will work together as we are doing right now,” she added.

Sheikh Hasina said the country will overcome the coronavirus sitation by working together. “That is the goal and the decision of the government as well,” the premier  said.

About relaxing of the shutdown, Sheikh Hasina said everything has remained closed for a long time.

“Other countries are opening their wheels of economy in phases,” she pointed out.

In this regard, the premier mentioned various stimulus packages and food and monetary assistances of the government for the welfare of the people.

She said the government in 19 packages allotted some Tk 1003 billion which is 3.7 percent of the GDP.

“I do not know whether any country in the world announced such huge amount (of its GDP) as stimulus package,” the premier said.

She also said the government included all poor, distressed and jobless people under its monetary and food assistance programmes.

Sheikh Hasina said the government has put highest priority to education as it knows that to build a hunger and poverty-free Bangladesh, there is no alternative to an educated nation.

“If light of education does not enter every house, it won’t be possible to eliminate poverty from the country,” she said.

Sheikh Hasina mentioned that her government has formulated the Education Policy and is implementing it to ensure that the light of education enters every house.

The premier said students of the country are very brilliant and they can prove their talent if they get chances.

She requested the students to build themselves as worthy citizens imbued with patriotism and humanity, and the government is providing all necessary supports in this regard.

Education Minister Dr Dipu Moni handed over a summary of the results to the Prime Minister online from her secretariat office.