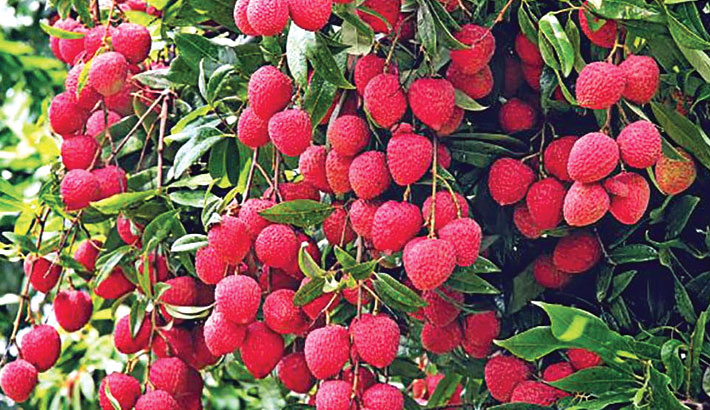 Bunches of lychees are hanging from a tree in a garden in Rajshahi district. The photo was taken on Friday. —sun photo

Mouth-watering seasonal fruit lychee has appeared in the city markets and elsewhere in the country though the price is still high.

The price of this juicy fruit is currently beyond the purchasing capacity of the common people as the supply is still limited amid the COVID-19 pandemic, traders said.

Rain, cyclone and adverse weather conditions damaged many lychee orchards across the country that also increased the price, said the farmers and market insiders.

The summer season will bring many other juicy fruits like mango and jackfruit by the middle of June.

But in spite of the availability of different types of fruit in the market, the demand for fresh lychee is always very high due to its unique taste, flavour and colour.

Roadside fruit sellers are asking higher price but they said lychee is being sold at Tk 300 to 450 per 100 pieces in the capital.

Sahadat, a lychee trader at Mohammadpur, said the early varieties of lychee has come to the market and they brought the good quality of the fruits to sell.

He also said the demand for lychee is thin in the capital than the previous year as many people have left Dhaka and the rest of the city dweller are busy to cope with the pandemic.

The fruit seller also fears the sale of fruit will be lowered in this season due to the pandemic.

The fruit traders said the price is high as the supply is scanty but the price will be reduced to some extent when the supply will be enhanced within the next couple of days.

Maliha Traders, a lychee seller at Shimultala Bazar in Ishwardi, said the wholesale price of lychee is around Tk 2000-2200 per 1000 pieces in the area.

Due to commercial value, many people are cultivating lychee and getting benefits by growing it. In addition to commercial farming, high yielding China-3, Bombay and Madrazi variety litchis are also being cultivated on homestead lands.

He said lychee is grown well in Rajshahi and Dinajpur districts, but lychee of Ishwardi is very delicious and famous across the country.

Many people are getting benefits by growing litchi as China-3 (hybrid), Bombay and Madras are the most popular varieties in the region.