Govt to stand by people until corona is over: PM 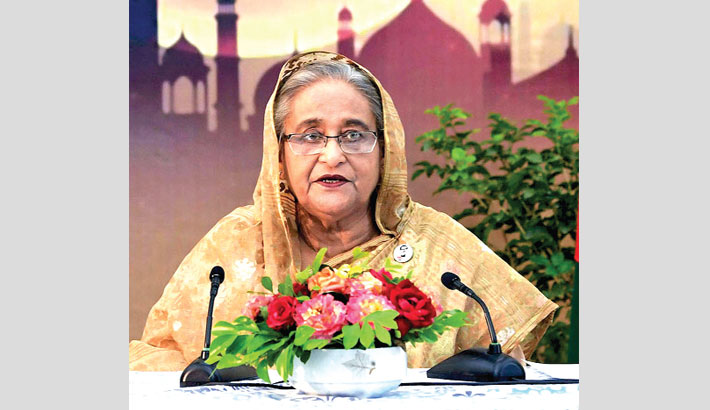 Reaffirming her government’s stance to be there with people until the coronavirus crisis is over, Prime Minister Sheikh Hasina on Sunday said this is not difficult at all to overcome any pressing problem if people remain united, reports UNB.

“Cyclone, [natural] calamities and pandemic will be there; we’ve to move ahead facing those. To face any calamity, united efforts of people are needed, not matter what’s it’s intensity …if people remain united it’s not tough to overcome that, and you [people] have proved that reality again,” she said.

The Prime Minister said this while addressing the nation on the occasion of holy Eid ul Fitr.

In her around 15-minute speech, Sheikh Hasina said the government has been able to face the coronavirus effectively in the last two and a half months with the cooperation and support of the people of the country.

“Until this [pandemic] crisis is over, I and my government will remain beside you, Inshallah,” she promised.

The Prime Minister said the World Health Organisation (WHO) in its forecast said this coronavirus pandemic will not go away so quickly. “But life won’t stand still…we’ve to move on taking coronavirus with us as long as the vaccine is developed,” she said.

Hasina said economic activities have to be resumed for the sake of lives and livelihoods.

“Most countries of the world have already compelled to relax their lockdowns because it’s not possible to restrict people’s paths of income for an indefinite period. It’s not possible at all for a developing country like Bangladesh,” she said.

Talking about the resumption of the economy, the Prime Minister said the government has already announced a Tk 101,117 crore stimulus package, which is 3.6 percent of the GDP.

She said 18 economic sectors, including export-oriented industries, small, medium and cottage industries, agriculture, pisciculture and poultry have been brought under this package.

To help the jobless youths and expatriates who have returned from various countries, the government has allocated Tk 2,000 crore (Tk 500 crore each) for Palli Sanchay Bank, Karmasangsthan Bank, Prabashi Kalyan Bank and Palli Karmo Sahayok Bank, she said.

Sheikh Hasina said the bumper Boro production has come as a blessing for the country at this time of disaster. This year some 48 lakh hectares of land were brought under the Boro cultivation and the harvesting is almost complete.

She congratulated as well as greeted the farmers for playing a vital role in ensuring food security at this crucial moment.

The incomes of shop owners have come to a halt due to the shutdown of shops and business entities, leaving their employees in untold miseries, the Prime Minister said adding that most of the shop owners do not have the financial capacity to pay wages to their employees. “As a result, they [employees] are passing their days in an inhuman condition.”

“We’ve given permission to reopen some shops before the Eid with a condition of maintaining the health rules and other systems. Those who’ve reopened shops and those go shopping, all must protect yourselves and avoid crowds,” she said.