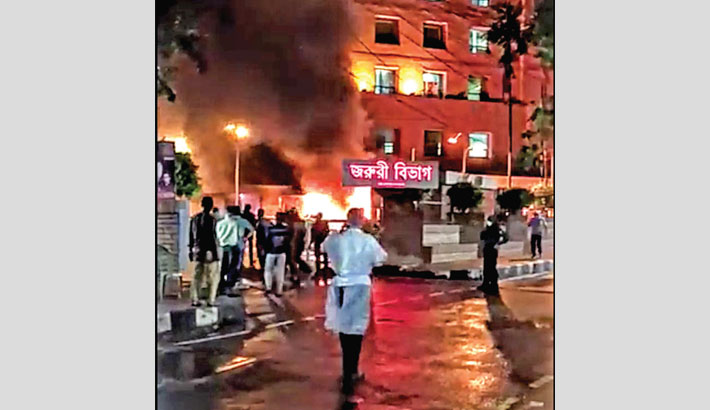 Alleged negligence of the United Hospital in the capital left five patients roasted alive as a fire raged through its corona isolation unit on Wednesday night.

An allegation is rife that the situation created over the fire in the private hospital was not addressed timely.

Sources said the hospital authorities did not release two of the victims tested corona negative to earn more money and fulfill its medical trading.

Police, fire service department and others concerned have found some laxity in the hospital’s measures to address the situation.

The corona isolation unit in the extended part of United Hospital was devoid of firefighting professional and equipment, he alleged.

Five patients were killed in a devastating fire in United Hospital in Gulshan area on Wednesday night.

Witnesses said the fire caught the makeshift isolation unit of the hospital around 9:30pm, but its authorities did not inform the Fire Service and Civil Defence (FSCD) immediately of the fire incident.

Rather, the Vatara Police Station informed the fire service department of the fire incident.

A delay in calling firefighters caused the flames to take a serious turn, causing deaths of five patients.

The authorities of the United Hospital in a statement rejected the allegation, saying that they informed firefighters timely of the fire.

Following their call, firefighters rushed to the spot and brought the blaze under control within 15-20 minutes, the hospital authorities claimed.

The fire is allegedly originated from an electric short-circuit and spread fast due to a gusty wind, it added.

The statement of the hospital authorities does not corroborate the account of FSCD Director General Brigadier General Md Sazzad Hussain.

The chief of the fire service department told reporters that they got information about the fire lately at 9:55pm and quickly reached the spot.

After dousing the flame, firefighters found the bodies of five patients who died from suffocation.

According to him, the hospital authorities called firefighters 25 minutes after the fire broke out.

After visiting the spot, Debasis told reporters that the makeshift isolation centre was a deathtrap as the fire victims could not get out.

The isolation centre was made of partex-like component which is highly flammable.

Initially, hospital authorities tried to douse the flame and killed time. They could not build any resistance against the flame as fire extinguishers expired one and a half months ago. “We will submit an investigation report soon. It is the hospital’s responsibility to change the expired fire extinguishers, which should have been replaced 45 days ago,” he said.

They (hospital officials) have fire hydrants but did not use, the officer said.

“There were ACs and electrical devices. Since there was an electrical line inside, the fire might have originated from short-circuit. We are scrutinizing everything,” he said.

The CID team said there were lots of chemical items including hand sanitizers were stored in the isolation unit.

Sources in the hospital said the electrical wires used in the corona unit were substandard and structure was not built in proper way.

“It was corona isolation centre in black and white. In reality, it had no staff and other engagement from hospital site. It was medical trading centre.”

Of the five dead, two tested negative, but they were not released by the United Hospital management.

Relatives of the two patients claimed that hospital authority neither released nor shifted the duo to main building.

In utter peculiarity, the hospital management filed a case of unnatural deaths with Gulshan Police Station.

Many termed the case to be manifestation of weakness of the hospital.

They said victims’ relatives are supposed to file case against the hospital. But the situation is contrary.