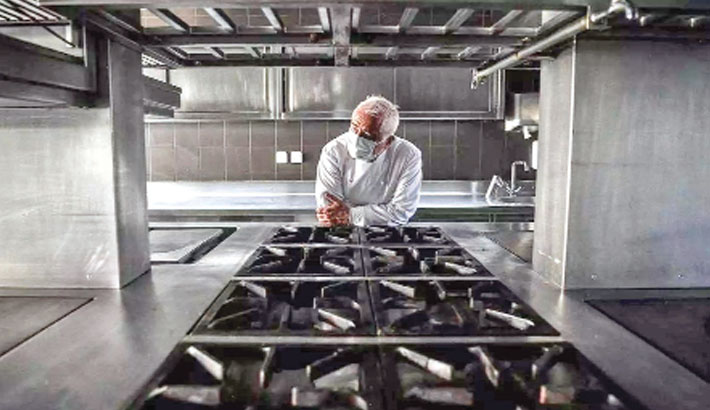 Two months ago Guy Savoy was at the very top of the gastronomic tree. His Paris flagship restaurant had yet again been hailed as the best in the world by La Liste, with tables booked months in advance, reports AFP.

Then the coronavirus came, closing restaurants across the planet.

Now the three-star Michelin chef is making soup that you can heat up at home in your microwave.  Not any old soup, of course, but Savoy's legendary artichoke soup with truffles, which comes delivered with a brioche speckled with mushrooms and truffles to dip into it.

"It breaks my heart to see a place that is usually so animated at lunchtime empty," Savoy told AFP, as he surveyed his elegant dining room at la Monnaie de Paris overlooking the River Seine and the Louvre museum.

Its kitchens lie mostly empty, with their fridge doors open, with only the patisserie team hard at work preparing brioches and mousse au chocolat and rice pudding for takeaway.

"These old-fashioned recipes bring us the comfort we need in these difficult times," Savoy said.

Like a host of top French chefs including his great friend and rival Alain Ducasse, Savoy has started doing home deliveries because his well-heeled clients can no longer come to him.

"Looked at from an economic point of view, what we are doing does not hold up," Savoy said, but it was important to keep in contact with his public.

He has come up with a limited takeaway menu of dishes specifically chosen so their taste would not be too adversely affected when they are reheated at a low temperature, like sole or quail confit.

The famous artichoke soup comes in a glass jar to be gently reheated on a stove or at 600W in a microwave, with the truffle shavings wrapped separately to be added afterwards.

Every dish comes with a little card explaining how best to heat and serve it, said chef Gilles Chesneau, with most of the meals prepared at the one-star Le Chiberta restaurant near the Champs Elysees.

"We also advise people to leave the starters and the desserts to sit out for five minutes, which will help to bring out the flavours," he added.

But this is not what Savoy's dreams are made of and he is chomping at the bit to get back.

"I am not a traiteur (someone who runs a deli)," sighed the great chef, but it was helping get some of his staff back to work.

Like many top chefs, the lockdown has been an emotional as well as financial hit for Savoy.

The brutal manner in which it was imposed on a Saturday night in mid-March made it even tougher for him.

"I had to announce it to the guests, the words catching in my throat," he recalled.

"I was knocked out. I have been working for 51 years and it is the first time I came up in front of an obstacle that I couldn't get over with work and energy. It's the feeling of being powerless," he said.

But on the bright side, Savoy said it wasn't like we have been through a war or an earthquake.

"The building is intact and my teams still have their know-how. We can restart quickly."

When that will be is another question, however.

Many believe restaurants will not be able to open in France until at least July, and then with tight social distancing restrictions, which should be less of a problem for top end addresses like Savoy's.

"They closed us in four hours. I not saying that we will be able to reopen as quick, but in 36 to 48 hours I could get the operation going again," he said.

Unlike some younger chefs, Savoy said he doesn't "believe in this talk of the world before and after (the coronavirus).

"This crisis is just a moment during which we will have to take a lot of precautions."

Which does not mean he is not worried about when and if foreign tourists will return to Paris, the world's most visited city.

They make up around 40 percent of his diners, most of them Americans and Koreans.

"Paris needs the whole planet to work. If there are no tourists, half of the restaurants will disappear," Savoy warned.