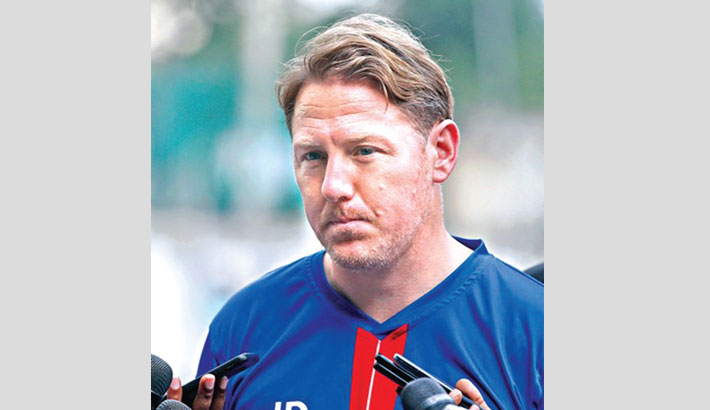 Bangladeshi booters are spending the corona days with family at their respective homes as Bangladesh Football Federation (BFF) has suspended all its footballing activities including international and domestic events for an indefinite period due to coronavirus outbreak countrywide.

Booters from both men and women teams have been training at home as they have been given individual programme and remain in regular contact with their respective coaching staffs during the lockdown. But the mental impact of not playing for a long period may do more damage than the physical impact.

Bangladesh head coach Jamie Day believed that his players are mentally fit at the moment but they need to get back playing football as soon as possible.

“I think at the moment mentally they [booters] will be ok as it's only been a few weeks so I am sure right now they are coping fine, just maybe bored and wanting to get back playing but we all understand the current situation and the quicker we do things right sooner we can get back playing football,” Jamie told daily sun over the phone on Tuesday.

Naturally, the players will feel fear of uncertainty and will be more affected psychologically in this situation; especially the young players will be more affected mentally than them who are settled in the national team as they will feel they are losing their chances. Besides, with this uncertainty for the return of games, booters will find it difficult to remain focused and motivated with no end goal to work towards.

While asking about this, Jamie replied, “We don't have any game planned yet so no player will be thinking about international fixtures just staying healthy and safe. They need to just keep training to the programmes set and keeping their minds clear.”

“The players have training programmes to follow and diet sheets will also have a watts group so we can all still social. When we can start back again then we will have to start pre-season and take this as a off-season break which will have helped some of them as I stated before in the year some of these had not had a break for nearly 2 years,” he added.

But Women’s team head coach Golam Rabbani Choton said that his booters are at an increased risk of playing up off the field.

“Yes, it will be harmful to the footballers, if they stay off-field and social isolation for a long time. It will impact on their mental health. Besides, the fear and anxiety caused by the spread of the coronavirus will also leave negative effects on their psychology. I think it will be a big issue for us to overcome in the future,” he said.