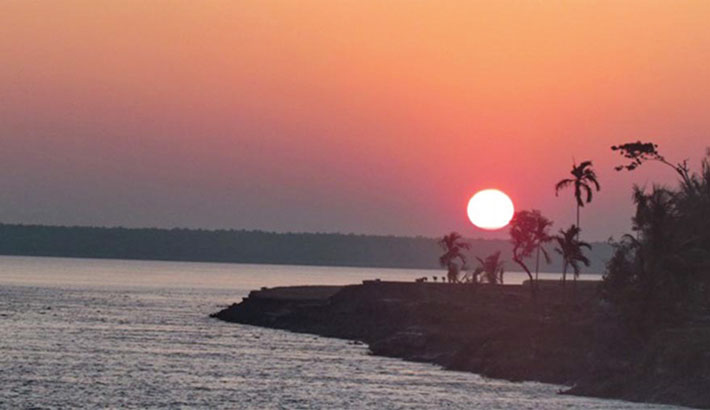 Some tourist spots are famous for their sunrises and sunsets. Monpura is such a spot that attracts  a record number of tourists for its sunrise and sunset spectacles.

It is one of the beautiful islands of Bangladesh. Located in Bhola district, the island has different historical importance from colonial times. Bhola is the biggest island in Bangladesh. It is situated on the southern region of the country. Twenty charlands in the 350-square kilometre island on the Meghna near the Bay of Bengal are the enchanting green spots surrounded by sea. It presents a rare beauty that is not observed elsewhere in the country. About 600 years ago, Portuguese pirates used to take shelter in Monpura  island. When the Portugueses left  the island, people from Bhola, Laxmipur and Noakhali started living there.

Monpura Island is now being eroded by the Meghna River on the one hand, and on the other hand chars (strip of sandy land) are emerging. During a trip by trawler or sea-truck along the Meghna, nothing from one bank to the other is seen. It appears that it is an unfathomable sea. The Meghna to the south of Monpura has fallen into the Bay of Bengal. Monpura Island was ravaged by the tidal wave on 12 November, 1970. Small haats and bazaars are available only a few kilometres away from Monpura. The lively scenery of char Sakutia and Char Kukri-Mukri enchants the tourists. The Forest department plants saplings here every year. Besides, deer are found in different bushes of Monpura. Hilsha fish of Monpura is very palatable.

The main attractions of Monpura are Chitra deer, monkey, python, dolphin and lots of various types of birds. The greenery created  by the Forest Department  about a decade ago has turned the island into an attractive tourist spot.

There are three Dukbungalows in Monpura Island. For example, Government Dukbungalow, Press Club Guest House, and Dukbungalow of Chowdhury Saheb. Tourists will have to take permission for staying in the government dukbungalow. It is the cheapest option to stay in Monpura. At the same time, the rest of the two dukbungalows or rest housees can be booked at any time after reaching the spots. It will take nearly BDT 200 to 300 for staying one night.

Visitors will also find some private hotel at Hazir Bazaar. It will cost you 100 to 300 for a single/double room. The hotels are: Hotel Dwip, Hotel Island, Saima Hotel or Hanif Hotel.

In the winter season, people want to eat the meat of duck. It is very popular. Similarly, sea fish is very familiar in every hotel of Monpura. These are Coral, Boal, Lobster, fresh milk of buffalo and regular item- duck. Happy to say, it will cost you only 60 to 70 for eating a full dish.

Winter season is the perfect time to visit Monpura. In general, the road is clear and you can move anywhere spontaneously. Anyway, using motorcycle is the best option to move on the island. On the other hand, anyone can also use boat where has the option to see the beauty of the Dwip. You can ride the rickshaw as well.

Tourists can go to Monpura by launch from Sadarghat using MV Farhan and MV Tashrif. It goes for Hatia from Platun no. 10. It will leave Dhaka between 5:30 PM and 6:00 PM. It will take anyone to Monpura within 7:00 AM the next day. That means the journey will be 12/13 hours long. Generally, it will cost Tk 300 to 350 for the deck. Tourists can also take a personal cabin. It will need 1200 BDT for a single cabin and 2200 BDT for the double cabin.

Then, tourists can go to Hazir Bazar from Monpura Ghat. It will take BDT 50 per person. They can go by rickshaw as well. Additionally, they will get hotel accommodation there. Equally important, they will have to come back to Dhaka at 2:00 PM from Ramnawaj launch ghat.

Anyone can also go to Monpura from Dhaka or Barishal via Bhola Sadar. He/she can go to the island from Tazumuddin Ghat by Sea Truck. It goes at 3:00 PM from Tazumuddin Ghat and comes back from Monpura at 10:00 AM. Similarly, from Char Fasson Betuya launch Ghat two launches come regularly to Janata Bazaar of Monpura.

From April to November the river is marked as a danger point and hence the launch movement on this route remains closed.