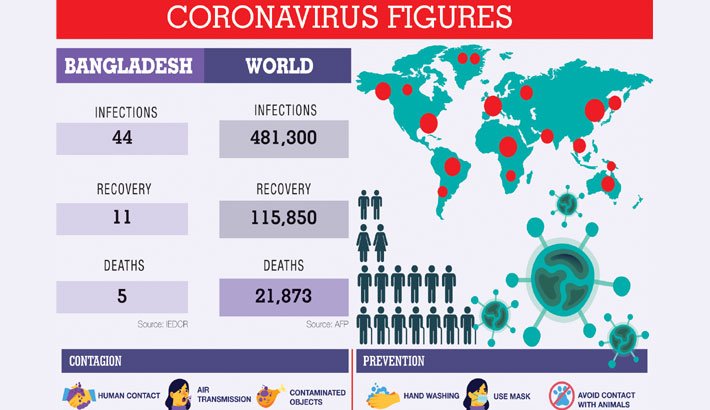 Residents of Dhaka and other major cities as well as towns across Bangladesh stayed indoors on Thursday as the armed forces and police fanned out to tighten government’s anti-coronavirus ban on public gatherings or non-essential movements, witnesses said.

On ly a small number of people ventured out of their homes to go to work as some offices continued to operate with skeleton staffs or for marketing in the kitchen markets.

Witnesses said vehicles were stopped by the security forces and those who failed to give a satisfactory answer for venturing out of their homes were either warned or fined.

Following a government ban, except for those operating for emergency purposes, most other vehicles remained off the streets in Dhaka and other major cities on Thursday.

Most of the capital city’s streets, lanes and by-lanes were completely deserted as residents stayed indoors, but some rickshaws were seen plying in some city-street carrying passengers going for emergency works.

Dhaka residents are keeping them confined inside their homes due to detection of some coronavirus cases, said Asgor Ali, a resident of Khilgaon area.

Earlier on Monday, the government declared a 10-day general holiday and a large number of people quit cities to join their families in different parts of Bangladesh.

Only the army and police personnel were seen patrolling around Dhaka streets.

While visiting different city roads including Sayedabad, Motijheel, Khilgaon, Badda on Thursday noon, this correspondent found some police men stopping rickshaws and asking its passengers and passersby about their purpose of violating the ban.

People started to indoors after the armed forces went into action from Wednesday in aid of the civil administration to ensure that people maintained social distancing and coronavirus suspects stayed in home quarantine to prevent the spread of the deadly virus.

Besides, the busiest place of the city Kamalapur Railway Station, Sadarghat Launch Terminal and bus terminals were shut.

However, lorries, covered vans and other vehicles carrying fuel, emergency services and perishable goods operated as those were kept out of the purview of the transport lockdown.

Being a huge number of the city-dwellers mostly lower income groups and students of different school, colleges and universities quit the capital.

After the first Coronavirus-infected death was made public by the health ministry, panic gripped Dhaka residents as well as other parts of the country.

Thousands of people, mostly students, began to leave Dhaka seven days back after the government shut down all educational institutions from March 17 to 31.

Prime minister Sheikh Hasina on Wednesday termed the fight against coronavirus a ‘war’ and appealed to the people to stay in their homes to help win the war against the virus.

Although the authorities concerned, including the ministries of education and health, told the students to stay at home during the holiday period and urged the guardians to ensure they complied with the order.