Is K-Pop A Bad Influence? 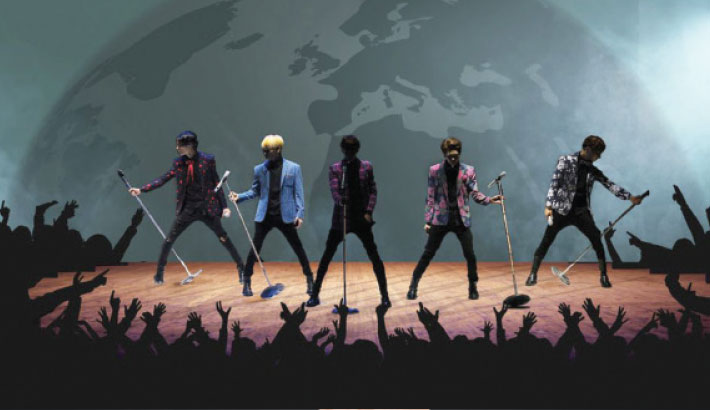 It is a well-known fact that music has no boundaries. Songs from different languages, countries and cultures can be popular among a totally unknown and new group of audiences. K-pop can be a good example of this. Originated in South Korea, K-pop is magnetizing the audiences around the world nowadays. K-pop is a popular genre that includes electronic, hip hop, pop, rock and R&B songs. Owing to its huge popularity, K-pop festivals are arranged in different parts of the world and Bangladesh is no exception in this regard. The listeners of our country also appreciate and enjoy these festivals very much.

Besides having catchy tunes, K-pop music videos are known for their visual effects and elaborate storylines. But the problem is that a good number of youths are getting increasingly addicted to this genre of music. It cannot be denied that K-pop may help understand South Korean culture; still it is affecting teenagers in a negative way which results in different troubles for them in the long run.

Though music helps us to relax, K-pop contributes to several health problems. Those who spend too much time for watching music videos and searching information about K-pop usually suffer from asthenia as a result of sleeplessness and skipping meals. Some k-pop fans remain glued to the computer or TV screen which can cause eye disease or memory loss. Besides, it can be harsh to ears too, if you listen to loud sound without any break. It also has been associated with depression, delinquency and smoking. Apart from these, it can cause a greater tendency to engage in reckless behavior than their peers who are not fan of K-pop. Some of the fans of K-pop, for instance, behave in an awkward way all the time and they keep blabbering about their idols instead of communicating with real people properly or sharing their own opinion.

Heavy K-pop addiction not only damages the mental and physical health, but badly influences their academic performance as well. K-pop addicts cannot concentrate on their studies, rather their mind always gets diverted to K-pop stuffs. They are so obsessed that they do not pay attention to the class lectures, rather they keep listening to music all the time. Instead of discussing about studies or other positive matters, K-pop fans encourage other teenagers to watch K-pop. In other words, they keep diverting from their studies, and this leads them to poor academic performance.

People are supposed to get themselves involved in different lively activities and pass quality time. But k-pop fans refrain themselves from participating in different playful activities. Instead of going out with friends, doing extracurricular activities and playing, all of which are good for their physical and mental health, the addicts keep themselves busy with k-pop stuffs or stay at home.

K-pop addiction may affect relationships. It is clear that most K-pop addicts do not like to go outside. They prefer sitting anywhere and enjoying their favorite hits or Super Junior’s new album without being annoyed by others. Such attitude may harm any relationship they have with others.

Some crazy fans publicly behave rudely with their parents. They become very arrogant when their parents do not provide money to buy new albums or buy tickets to attend shows or events related to k-pop. Sometimes they get too much attached emotionally to k-pop that they start following Korean culture instead of following their own culture.