We failed to execute plans: Ervine 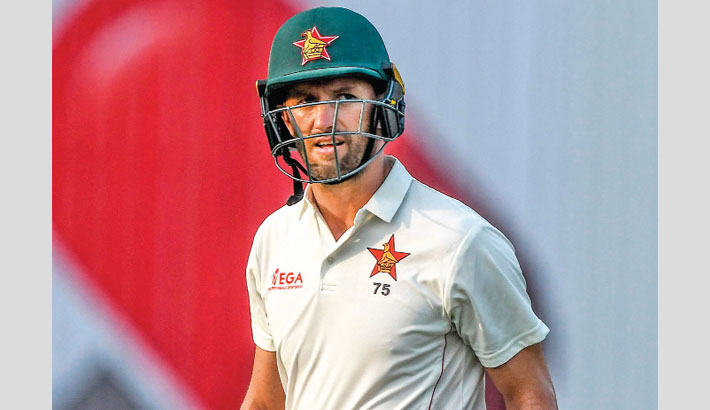 The interim Zimbabwe skipper Craig Ervine said that they failed to execute their plans properly as they lost the one-off Test against Bangladesh on Tuesday but the skipper insisted that they are looking forward to one-day series which is set to start from Sunday (March 1) in Sylhet.

The Zimbabwean side came to Bangladesh for a full-fledge series packed with a solitary Test, three ODIs and two T20s. Missing their regular skipper Sean Williams, Craig Ervine led the team came to visit Tigers’ soil after completing a satisfactory Test series against Sri Lanka at their home.

After suffering an innings defeat against Bangladesh, the interim Zimbabwe skipper said they could not execute their plans properly on the field but he said they are looking forward to the shorter format after the disappointing result in the Test.

“It was a combination of application and execution. The guys obviously tried to go over the top and didn’t execute the plans properly,” Ervine said during the post-match Press conference at Sher-e-Bangla National Cricket Stadium.

“We are going to Sylhet where we haven’t played a one-day game. [But] We had success in the Test match there. We haven’t played much white ball too, so the guys are excited to get into the format,” he said.

Bangladesh lost one Test in the two-match Test series against Zimbabwe in Sylhet back in 2018. The visitors side, who have not played much of shorter version cricket since July, 2019, during the series against Ireland.

The ODI series will also be the first for Bangladesh after the post-2019-World Cup tour in Sri Lanka with a six months of gap.

Zimbabwe side will get their missing experienced players back ahead of the ODI series as skipper Sean Williams will also be back for the shorter format.

Ervine said lack of experience in bowling was a reason that could not let the visitors build pressure on the hosts, despite the fact that the wicket was good enough to bat on to build a better total by the batsmen.

“We have an inexperienced bowling line-up. Charlton Tshuma was playing his first game. Victor was playing his third Test match. Ainsley played a handful of games. Only Donald Tiripano is the experienced one. We just didn’t hit the right areas for long enough. Without doing that, you can’t build any pressure,” he said.

“The wicket was good enough to post a score like that. Getting bowled out for 265, put us in the back foot, and allowed Bangladesh to go past us. We could have also batted better in the second innings. The wicket wasn’t really that bad. I thought our bowlers worked hard to get those six wickets. Obviously didn’t hit the right areas enough, but I just thought that our batting let us down,” he said.

With the interim skippers hundred in the first innings, Zimbabwean side were able to put 265 runs in their first innings, but the visitors were already under a mountain of pressure after Bangladesh batsmen putting 560 runs on the board, thanks to Mushfiqur Rahim for his double hundred and Tigers’ skipper Mominul Haque for his brilliant 132.

Nayeem, who took four wickets in the first innings, was again far crueler during Zimbabweans second innings, despite the glimpse of resilience from the Ervine and Sikander Raza in the fifth wicket partnership from 44-4 as Nayeem got his second five-wicket haul in longer version format.

After a superb show from the Bangladesh spinners, the interim Zimbabwe skipper was also vocal of Tigers’ spinners.

“Nayeem bowled well. He was consistent, got a bit of drift and dip. He always asked questions and it was the same with Taijul. They were not giving away easy runs,” Ervine said.

“It was very disappointing. At the time it seemed like me and Raza were going well. We got some momentum on our side and then we basically gave it back to Bangladesh. I have always wanted to get back-to-back hundreds in a game and I thought today was the perfect opportunity,” he added.