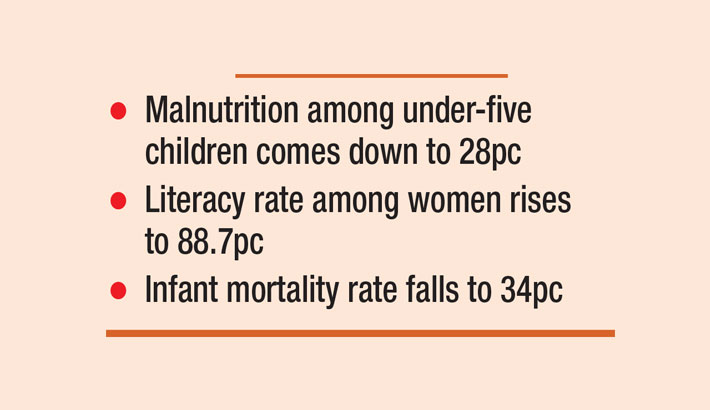 Bangladesh has made remarkable success in women and child development alongside making headway in the areas of health, nutrition, water, sanitation, hygiene and education, according to the Multiple Indicator Cluster Survey (MICS) 2019.

Bangladesh Bureau of Statistics (BBS) unveiled the findings of the survey on Monday.

The survey was jointly conducted by BBS and UNICEF, Bangladesh.

A major development the country witnessed is sharp decline in chronic malnutrition among under-five children. Malnutrition came down to 28 percent in 2019 which was as high as 42 percent in 2013.

The number of underweight children also dropped to 22.6 percent from 31.9 percent, say the findings.

Literacy rate among women, aged between 15 to 24 years whie the rate of  women attending secondary or higher education rose to 88.7 percent in 2019 which was 82 percent in 2013.

Households’ access to electricity rose to as high as 92.2 percent which was 61.5 percent six years ago.

Use of basic drinking water services — an SDG indicator — was found to be 98 percent in Bangladesh.

Population using basic sanitation services was found to be 64.4 percent at the national level with nearly similar level in urban and rural areas.

Use of improved sanitation facilities increased to 84.6 percent which was 76.9 percent and in hand washing facility with water and soap jumped to 74.8 percent from 59.1 percent in six years.

Use of basic hygiene services was found to be 75 percent at the national level, including 87 percent in urban areas and 71 percent in rural areas.

The number of households consuming iodized salt expanded from 72.6 percent to 76 percent in the said period.

The number of households possessing at least one telephone, either fixed or mobile, increased to 95.9 percent which was 87.2 percent in the previous MICS. Computer possessing households also rose to 5.6 percent from 3.4 percent.

Internet access was found to be among 37.6 percent households in 2019 while ownership and use of mobile phones among women aged 14-49 years were found at 71.4 percent and 97.8 percent.

MICS2019 showed that women safety also improved in the country. Percentage of women aged 15-49 years feeling safe walking alone in their neighbourhoods after dark was found to be 74.8 percent.

In reproductive and maternal health, Bangladesh made a lot of progress as institutional delivery rate jumped to 53.4 percent from 31 percent six year ago.

But the tendency of caesarean section among women increased from 19.1 percent to 36 percent.

The number of children ever breastfed increased to 98.5 percent from 97.1 percent, but breastfeeding within one hour of birth of a baby dropped to 46.6 percent from 57.4 percent.

The survey was conducted between January 19 and June 01 2019 with random sampling among 61,242 households in 64 districts.