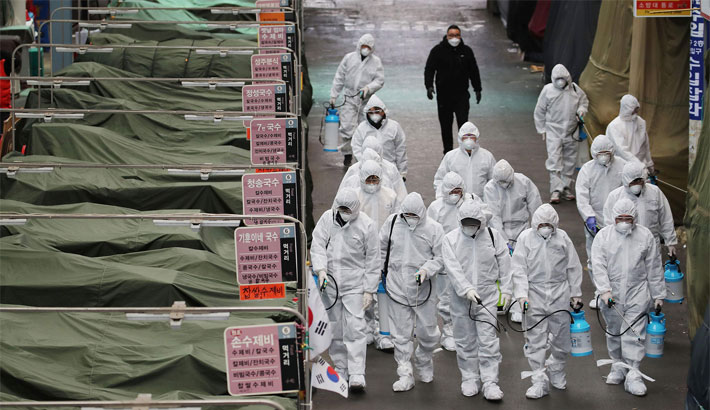 Market workers wearing protective gear spray disinfectant at a market in the southeastern city of Daegu in South Korea on Sunday as a preventive measure after the COVID-19 coronavirus outbreak. – AFP PHOTO

TOKYO: A third person from a coronavirus-stricken cruise ship quarantined off Japan has died, the health ministry said on Sunday, as new infections among former passengers emerged, reports AFP.

Japan has been criticised in the face of mounting evidence that the quarantine imposed on the Diamond Princess did little to stop the virus spreading.

A Japanese man in his 80s passed away from pneumonia after being taken off the ship, the health ministry said Sunday.

Two elderly passengers died on Thursday after contracting the virus.

Nearly 1,000 passengers were allowed to leave the ship this week after testing negative, but there are now serious concerns about their status.

Among them was a woman in her 60s, who returned home to Tochigi prefecture north of Tokyo by train after disembarking the ship on Wednesday. She later developed a fever and tested positive on Saturday, a local official told AFP. Health Minister Katsunobu Kato admitted Saturday 23 passengers were released without being tested for the virus during the quarantine period.

“There has been a judgement that those who disembarked after testing negative had no problem, but it has now become clear that those people can turn positive,” Tochigi governor Tomokazu Fukuda told reporters, urging “additional measures” to contain the spread.

On Sunday, Kato said he took the latest case “seriously and will strengthen follow-up of passengers”, with daily phone calls from local health officials and by asking them to not make any unnecessary outings or use public transport.

Those leaving the ship had already been asked to limit travel and wear a mask in public, raising questions about whether the authorities themselves believed a 14-day on-ship quarantine had indeed prevented the spread of the virus.

In addition to those allowed off the boat after testing negative, 100 former passengers who had been in close contact with someone who tested positive for coronavirus have disembarked for quarantine on land.

Still left on the ship are some travellers waiting for charter flights home and roughly 1,000 crew—most of whom were not placed in isolation as they were needed to operate the Diamond Princess.

Critics suspect they were inadvertently spreading the virus throughout the vessel, which saw more than 600 cases of the COVID-19 disease.

Kato has defended Japan’s on-board quarantine, telling a TV programme Saturday there was no medical facility large enough to admit more than 3,000 people at once.

But the decision of several foreign governments to evacuate their citizens, and stinging criticism by an infectious diseases specialist who described the quarantine on board as “completely chaotic”, have undermined Japan’s case.

Separately, Japan has confirmed at least 132 cases of infection—including returnees from the Chinese city of Wuhan, the epicentre of the new virus. In many cases, authorities have not been able to trace how people got infected.

“As we are seeing cases in which we don’t know the infection route, now is an important phase in preventing mass infection,” Prime Minister Shinzo Abe told his ministers on Sunday at a meeting to discuss counter-measures against the virus.