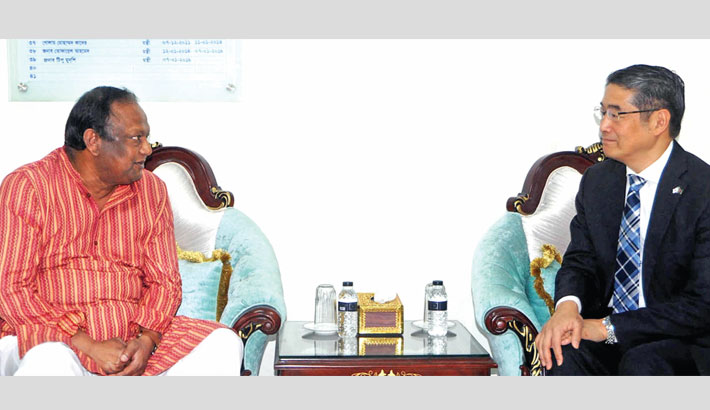 Commerce Minister Tipu Munshi exchanges views with Japanese Ambassador in Dhaka Ito Naoki at his secretariat office in the capital on Wednesday, They discussed different issues relating to boost bilateral trade and investment through removing barriers.

The minister said this remark during a view-exchange meeting with Japanese Ambassador Ito Naoki at his secretariat office, reports BSS.

Mentioning that Japan has been providing duty and quota free trade facilities to Bangladesh, Tipu Munshi said the volume of bilateral trade and investment between Bangladesh and Japan could increase further through different initiatives such as JWG, free trade agreement.

The minister revealed Prime Minister Sheikh Hasina is scheduled to visit Japan soon and during her visit a memorandum of understanding (MoU) is supposed to be signed between Bangladesh Competition Commission (BCC) and Japan Fair Trade Commission to strengthen efficiency of BCC.

Tipu Munshi said some 100 special economic zones are being developed across the country at the initiative of Prime Minister Sheikh Hasina, and meanwhile different countries have moved forward to invest there where Japan is in the lead.

Japanese Ambassador said his country became happy in Bangladesh’s improvement in the ease of doing business index. Japan also hope that Bangladesh’s GDP would increase to double-digit soon, he added.

Ito Naoki said Bangladesh has been doing well in manufacturing light machineries and Japan is keen to extend cooperation to Bangladesh in this field.