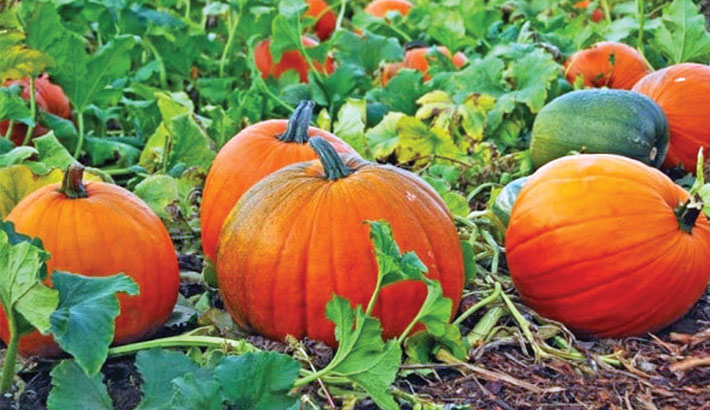 Pumpkin cultivation through modern technology and new farming methods have been creating new economic opportunities for farmers across the country.

Pumpkin has a range of fantastic health benefits, including being one of the best-known sources of beta-carotene.

Consuming foods rich in beta-carotene may reduce the risk of developing certain types of cancer, offer protection against asthma and heart disease, and delay ageing and body degeneration.

New technology gives high yield and better profit than that of other crops in the char and dry areas through adapting to the climate change issues.

Though this vegetable is mainly produced in the country’s southern region, new farming methods are getting popularity in different char, haor and other leftover land areas.

Pumpkin doesn’t have a fixed harvesting period, farmers can harvest it anytime, and there is no post-harvest loss as well.

Growers usually start pumpkin farming at the end of the rainy season when water level decreases in rivers and the chars appear.

Though this vegetable can be cultivated throughout the year, it is vastly cultivated in summer and winter seasons.

A large numbers of farmers are engaging themselves in different hybrid varieties pumpkin cultivation on lands, premises of their houses, roadside empty places, riverbank, embankment and other leftover land considering its economic prospect.

Pumpkin is rich in vitamins and minerals but low in calories. Pumpkin can be stored for up to a year.

It is also called the ‘cheaper nutrient’ for the poor as its seeds, leaves, and juices are packed with powerful nutritional elements.

Pumpkin cultivation has gained popularity in the river basins and chars area as those land has been empty during dry seasons.

Many studies have suggested that eating more plant foods such as pumpkin decreases the risk of obesity and overall mortality.

It can also help prevent diabetes and heart disease, and promote a healthy complexion and hair, increased energy, and a healthful body mass index (BMI).

Mehedi Masood, director of a project under Department of Agriculture Extension (DAE) on nutrition through year-round fruit production, told the Daily Sun that farmers are making higher profits with a less work in pumpkin cultivation. “Farmers can cultivate pumpkin on left over land, chars, house yard, any empty places,” he said, adding that production cost of pumpkin is also lower than any other crops.

Bangladesh Agricultural Research Institute (BARI) has developed the pit-cropping technique for pumpkin farming, which has gained popularity in char areas.  This new farming method is helping improve the livelihoods of many poor people as using this method they can grow pumpkins in the sand and fallow lands.

Besides, it only takes four months to harvest pumpkin after the plantation. Majority of the country’s pumpkin cultivation starts in the first week of January and harvest begins in the middle of March to early April.