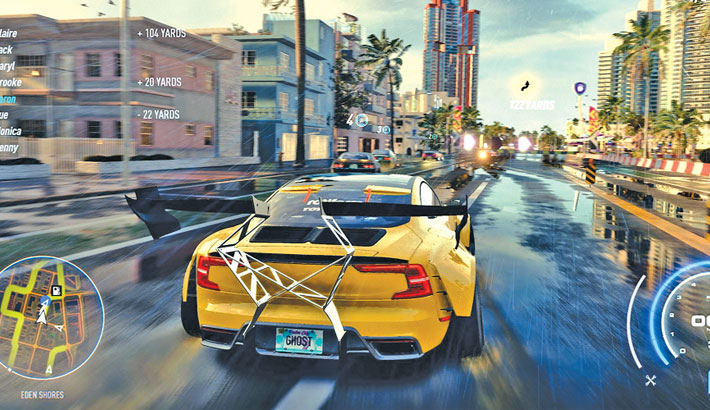 Later in folder I found some games. From few games I have choose to play Need for Speed which is famous racing game from the famous maker EA (Electronic Arts).

I used to play the game after coming home from school. Lamborghini Diablo my favorite car to hit on NFS road. The Need for Speed was first release of NFS series in 1994. After that many series have launched like, Need For Speed II, Need For Speed Porsche Unleashed, Need For Speed Most Wanted etc.

Last year 2019 EA have launched Need For Speed heat. According to EA NFS Heat is most playable game after NFS Most Wanted Series. I am also playing this game for the last few months. Very exciting! There are day and night modes.

During the day you will be able to earn game cash to purchase new unique and exciting cars and night mode race on street but, did not get caught by copes! EA have included 132 cars Such as, Mitsubishi Lancer Re-evolution, Lamborghini Hurricane, Porsche and many more!

There are four chapters for NFS heat series. Each of the chapters comes with different story and mission. Some missions will be for Off-Road Racing, some will be track tracing and some will be Lap Racing.

From my point of view lap racing is fun to race with racers. When you race with same cars on the street you may get bored. You have options to upgrade car. For upgrade you have to earn reputation point in night mode race. Each of points are very curtail to unlock your next car.

But, as I mentioned earlier do not get caught by cops if you get caught then 20,000$ will be deduct from your game cash balance. In the game you will be lost yourself in cinematic story. Truly, for NFS Heat EA have bring amazing cinematic stories for each of new chapters.

Before hit on the street you can chose your own character to set for driving sea t.That’s all from me about NFS heat for today. You can also try the game to unlock new cars to race on NFS success tales!