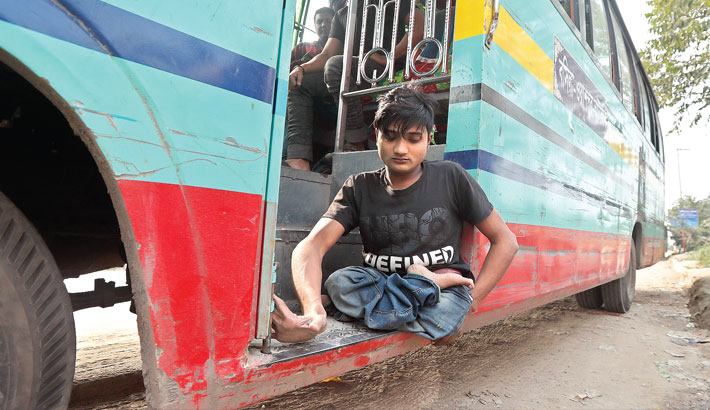 Physically challenged Nurul Alam overcomes his limitations as he works as a helper of a bus driver. Instead of depending on other persons to maintain his livelihood, he is doing the risky job. The photo was taken from Basila in the capital's Mohammadpur area on Tuesday. — Reaz Ahmed Sumon

There are people who have defeated physical disabilities to become famous in various fields. Their determination to live with dignity helped them to conquer all obstacles.

Nurul Alam, a 22-year-old physically challenged youth, is one of those rare humans who live with dignity after taking up a challenging job of a bus helper eight years ago at the age of 14.

In most case, physically challenged people live a life of pity depending on alms. But, Alam wanted to live an honourable life and has succeeded.

In Bangladesh, there are some people holding major positions despite being physically challenged. But those who belong to poor parents fall back due to lack of education and are forced to do petty jobs or beg.

But Alam stands out. He was determined to fight his disability due to neonatal problems which prevents him from walking normally.

He took the job of a bus helper in crowded Dhaka where people fight to survive and has little heart to help others.

Talking to the daily sun, Nurul Alam said “I have been suffering from neonatal disability. I did not permit my physical inability from doing hard work. I wanted to live honourably and not seek alms.”

Initially when Alam started his job of a bus helper eight years ago, transport owners and drivers were reluctant to employ him.

But the situation has changed now and he is now praised by his bosses as an experienced, efficient and sincere worker.

Hailing from Noakhali Sadar, Nurul Alam has been working as bus helper in the capital for eight years. He cannot walk well. His father, Md Ismail of village Andarchar, could provide education only upto class three.

Then he took up the challenge of living with dignity and moved to Dhaka.

With his daily earnings of upto 800 taka, he managed to get his two sisters married and now takes care of his family.

Alam’s employer —- Rajani Gandha Paribahan —-has backed him to ensure that he could live with dignity.

“Quader Sir has directed all concerned to allow me to do duty in any bus I like. I have taken the challenging job to show my might of overcoming obstacles due to disability,” he said.

Alam called upon other disabled people to work hard and lead an honourable life instead of begging.

“Other physically challenged boys and girls should follow me and be encouraged to work hard, earn a decent livelihood and support their family,” he said.

At the age of 40, Roosevelt was stricken with polio which limited his ability to use his legs. Yet, he became governor of New York. He was elected President of the United States. He remained in office until his death in 1945, the longest-serving president in US history.

Stricken by a severe illness when she was a child, Hellen Keller was deaf and blind. She became a celebrated author, speaker and activist for the deaf and blind.